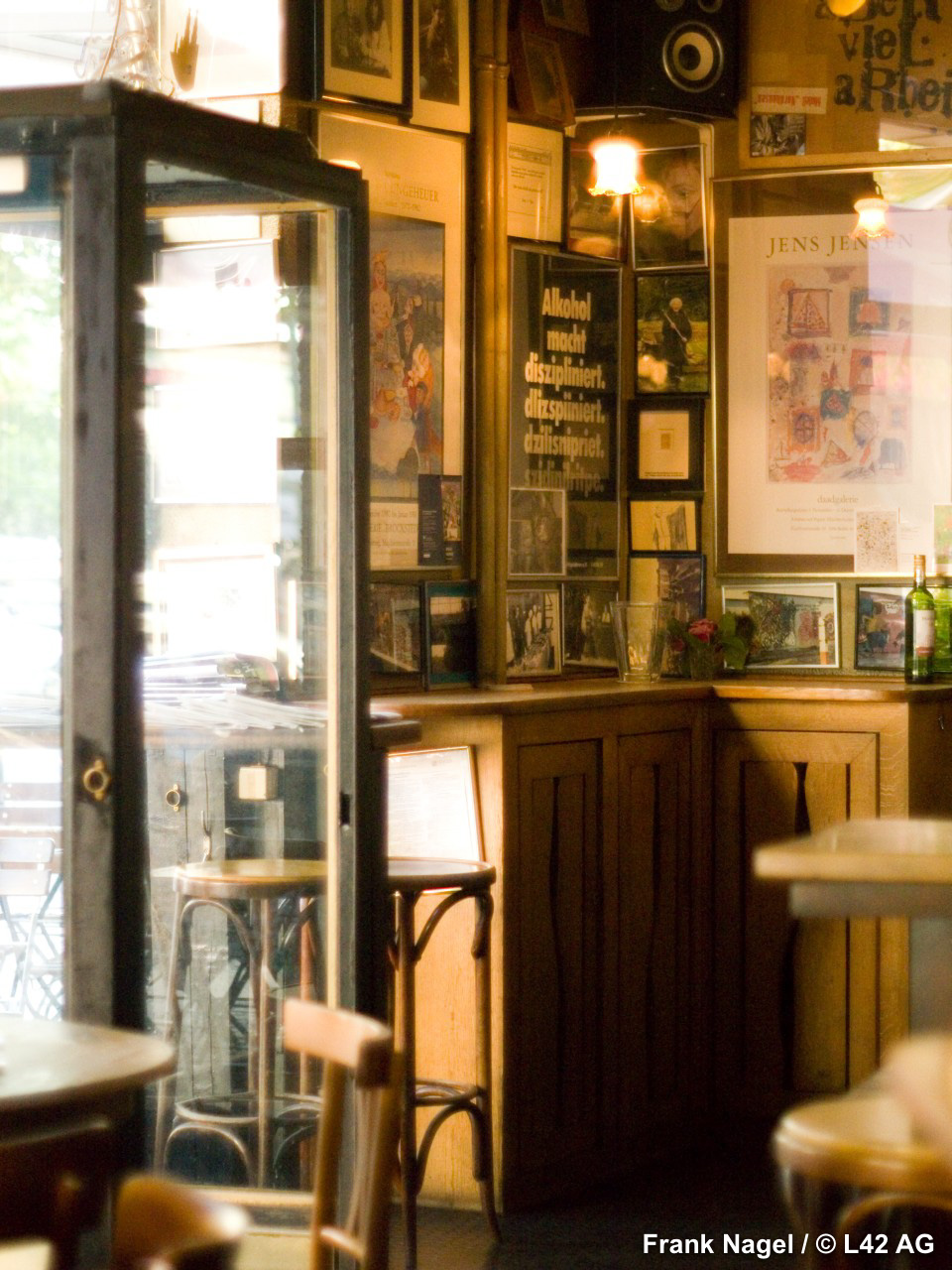 When we get off the S-Bahn at Savigny Platz the air is no longer that of Grunewald, but we’re not only bringing the memory of it with us, but the understanding that there’s always a faint suggestion of it even here in the city. When we feel that subtle current of cool air we know where it’s coming from.

There’s no lack of bookstores, antique stores, shoe stores, or home furnishing stores in and around Savigny Platz nor is it lacking in restaurants. Some of the names and some of the tables look inviting enough but our sense of smell brings us to a strangely captivating and simple restaurant by the name of Zwiebelfisch. It’s a bar, actually, one where you smoke (usually after the kitchen closes), you talk, and you meet people of all types except for tourists. You can eat from noon until late at night choosing from among a number of hearty and unpretentious dishes, Berliner style: pea soup with bits of sausage, lentil soup, herring with potatoes, chili con carne…Nothing whatsoever for refined noses or palates. The odor of spices is strong and, above all, mixes with the cigarette smoke and the fumes of Kölsch, the light beer that hails from the city of Cologne. This restaurant is not only popular and down-to-earth, it’s also deeply loved and therefore always full of those who, as we’ve said, like to smoke, drink beer, and eat spicy food. But even if you leave this bar feeling a little wiped out you also leave feeling happy, a cathartic haze which leaves you reinvigorated and in a good mood. You feel like you belong to the city and not to any particular social class or particular profession, not to any intellectual category, not to a political idea, but simply, archaically to the varied citizenry of Berlin just as it is. In Berlin the working-class is somewhat intellectual and the intellectual class knows what work is, and they both eat the same kind of soup and drink the same kind of beer at the same table more than in other cities. The bus-driver’s, barkeeper’s, and garbage man’s wisecracks all combine here with pure philosophy as if there weren’t the slightest thing strange about it. A certain spirit like that to be found in Heinrich Zille’s drawings or in Erich Kästner’s tales is still very much part of the people today, it still characterizes them, and shows no signs whatsoever of going anywhere. How the Berliner has managed to make it through the steamroller of history and stay not only alive, but enthusiastic and lively, remains an alchemical mystery most likely hidden somewhere in the air. We leave Zwiebelfisch with the air of the people impregnating our clothes and will need to take a few steps before it gets put it back into the atmosphere.

It is now time to follow the Kantstraße up to Number 106 in order to visit the unique perfume shop Harry Lehmann, which is open Monday through Friday from 9 a.m. to 6:30 p.m. and Saturday until 2 p.m. Between Zwiebelfisch and Lehmann there are a number of shops and Chinese and Far Eastern restaurants with smells that are no longer exotic but simply part of the banal quotidian fabric of the globalized world. The perfumery Lehmann is a shop from another time stuck in the middle of a jungle of new stores and shopping centers and stopping by is a truly special experience. It’s like taking a little trip across an iced-over lake and stopping to go fishing for emotions and memories alive somewhere down there below which we didn’t even remember existed. There are about fifty different scents and all of them are produced with essential oils from France. Curiously enough, one half of the shop is taken up by fake flowers. The precious fluids, however, are sold by weight and are relatively reasonable as you save on all the costs usually taken up by advertising and packaging. In fact, you can even bring a bottle from home and have them fill it up for you with whatever scent – or combination of scents – you desire. The most popular by far is Number 58: Tulpe, tulip, a fresh and classic fruit-like scent. Heliotrop smells of vanilla, Nerolis a subtle fragrance of orange flowers, Akazie the powerfully sweet and intense smell of acacia trees which, here in Berlin, bloom in May, and Lindenblute, the delicate and sweet fragrance of the linden trees which flower just after the acacia trees and which are a hallmark of the city. Every Berliner  about to go on a long trip should take a little bottle with them in the case of an attack of nostalgia, or maybe the municipality of Berlin could even take it upon themselves to spray a bit over the construction sites lining Unter den Linden everyday to help us deal with the displeasure of seeing the beautiful avenue suffer so unjustly! But let’s have a sniff of the eau de cologne that here is called Eau de Berlin and which is crisp, modern, fresh, intense, and rather citrusy. And yet, here in Berlin, as of today, there are no citrus fruits, so this is simply a case of an olfactory interpretation of the city’s dynamic nature. Moving along, we can also smell two types of rose essence here and a marvelous and truly singular violet perfume called Veilchen, which is likely very similar to the fragrance Marlene Dietrich liked to wear.

You can take as long as you want to sniff about and even if 50 is a rather large number, every single one manages to conserve its own distinctive character longer than those found elsewhere and you don’t have the sensation of suffering from olfactory confusion as in those perfumeries of more well-known scents. Our sensibility for particular smells is something very personal and, in any event, here there is a very good chance that everyone will find something that reminds them of some moment of their lives. * Maybe someone of a certain age who has traveled the world regularly is suddenly caught for a second and reminded of being twelve years old again and walking through Paris simply on account of a whiff of violet.

The saleswoman always smiles patiently and listens to everyone’s story and then just puts the fragrances back on the shelf, in order, mentally, together with all the others.