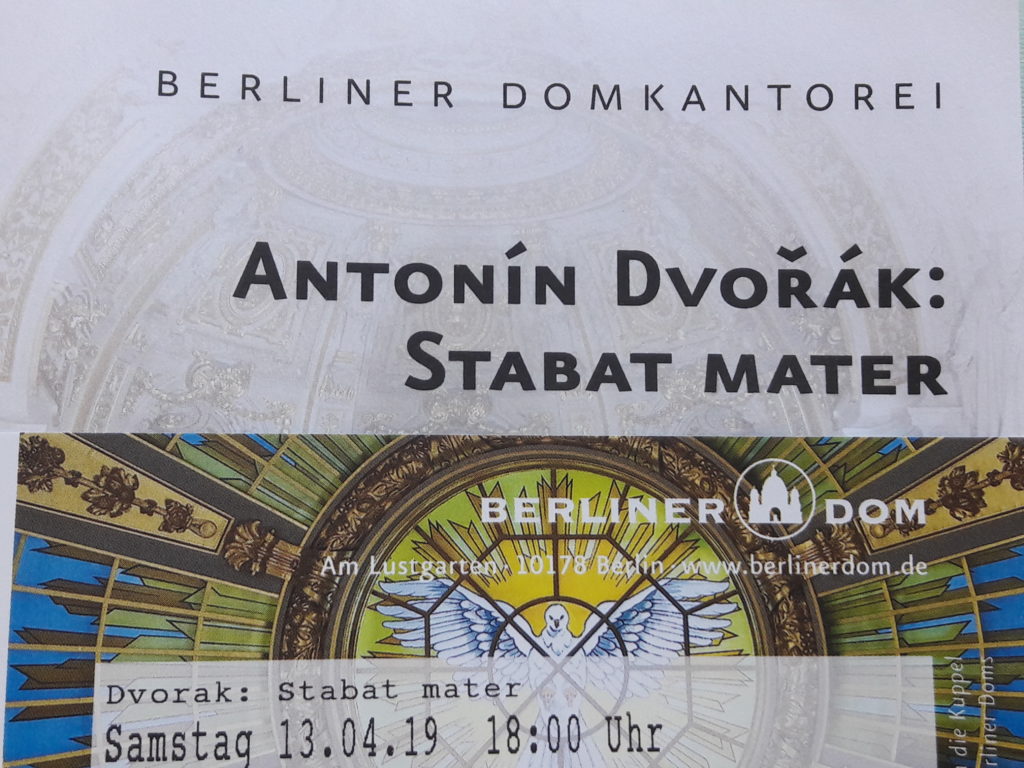 On Saturday April 13th  the Berlin Cathedral was full of people listening to the Stabat Mater by Antonín Dvořák.

The Stabat Mater is a Holy Week classic.

“Stabat Mater dolorosa iuxta crucem lacrimosa, dum pendebat filius”, meaning the Mother was sorrowful and full of tears at the cross where her son was hanging, as Jacopone da Todi wrote in the 13th century; and in the subsequent centuries lots of music has been composed, based on these words.

The subject of sorrow at its apex is dear to the Christian tradition, which then transforms it into compassion for the suffering of all men and even sublimates it into divine consolation and the hope of Resurrection.

Dealing with sorrow is in any case a universal issue that accompanies human affairs, and here in Berlin we enjoyed a fantastic interpretation of a piece of music that is itself a masterpiece.

Those who have in mind the very religious text by Jacopone and then listen to Dvořák’s free and lively orchestration will smile, euphoric and relieved, at the notes of strength, courage and hope, at the tones of optimism that increasingly triumph over tragedy. It starts with a light melody, then goes on with an impressive crescendo reaching an amazing and overwhelming finale in the Glory of Paradise.

We would have liked to clap happily until our hands hurt, but the great conductor Tobias Brommann asked us not to as a sign of respect for the theme of the death of Christ, so in the end we all stood up in a long silence to show our gratitude for this incredible performance.

After going back home I thought about how this Bohemian composer had produced such beauty after seeing all three of his children die.

How do some great men manage to transform horror into beauty and what inner strength sustains them?

I recalled the figure of Pietro Bartolo from Lampedusa, who for years sighted illegal immigrants even before they landed on the island or saw their bodies, and always tells terrible stories without losing hope and humanity. I thought about the film Life is Beautiful that tells a story that is terrible and at the same time full of love.

It seems that the light of awareness makes some great figures capable not only of seeing far, but also of illuminating those around them, encouraging them to keep going on with confidence, whatever happens.