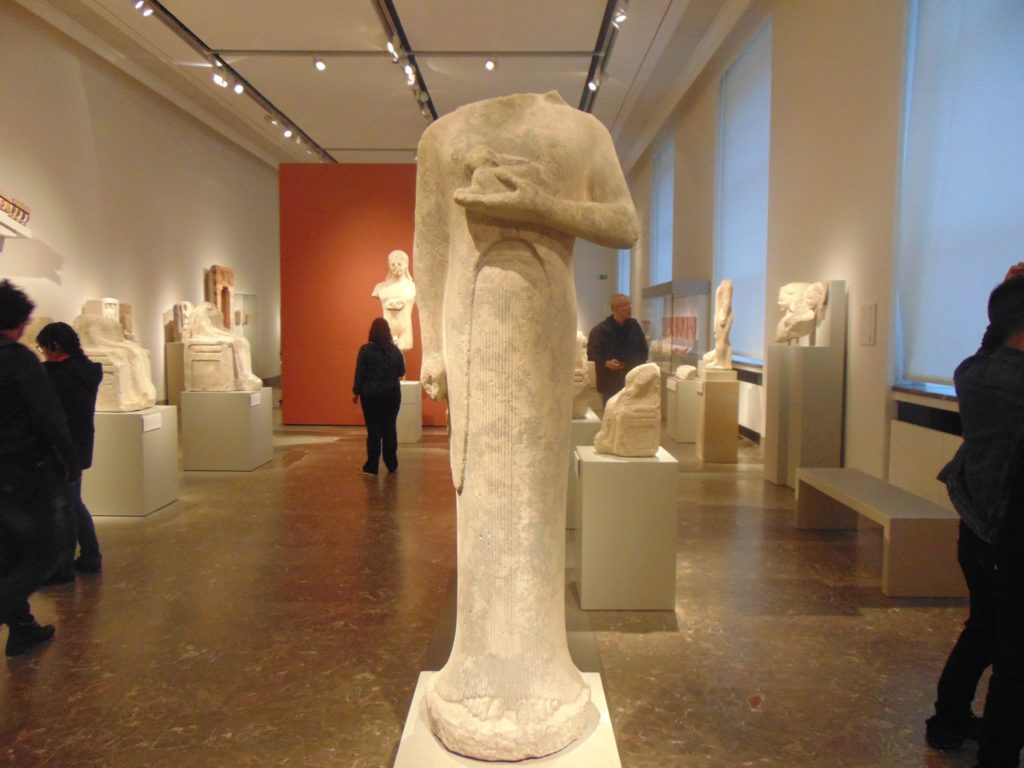 Taking a trip to the museums offers us a good opportunity to tune our minds and to get a close up of our ancestors while in the process discovering how certain modern customs are actually pretty ancient, or rather, how certain archaic customs are incredibly similar to our own.

The ancient civilizations that have been researched the most are the Babylonians, Egyptians, Greeks, and Romans, all of whom are very well represented on this island of ours.

When you study them at school, you are forced to study the periods of their crowning achievements and then crystalize and classify them in a few fixed concepts, almost as if they were not to escape our definitions of them.

Naturally, however, thanks to Johann Gottfried Herder’s suggestions in the 19th century – though we surely would’ve figured it out on our own –, we know that civilizations and peoples develop in a dynamic fashion along extended and various temporal arcs and that in their beginnings, development and decay they all resemble one another to an incredible degree and can be compared to the life of any living being that moves through the stages of youth, old age and death.

These observations, modulated in their most vague variations, belong to ancient times and continue up through the history of philosophy, often traced to the great families of thought of Platonism and Humanism.

When you become passionate about the dawns and twilights of peoples, or simply remember to keep in mind the dawns and twilights of cultures as well, big or small as they may be, history certainly becomes more profoundly relative. You begin to understand just how indistinct the lines between one culture and another are and just how much one influences another. In the first rooms of the ground floor of the Altes Museum, for example, you can see how Egyptian the Greeks were up until the 7th century BC with their statues of rigid bodies like columns covered by pleated chitons; how Greek the cities of southern Italy were with their large theatres; and then, going up to the first floor, how Etruscan Rome was and at the same time how Assyrian, Phoenician, Egyptian, and Greek Etruria was etc. And then, taking a few steps over to the Pergamon, we discover how Chinese the Arabs were, or how Arabic the Spanish and the Sicilians were.

In the Middle Eastern section of the Pergamon Museum you can admire the inlaid, wooden ceiling of the cupola of the dome from the Alhambra in Granada, the Spanish city which was under Arabic rule until 1492. And then, returning to the first floor of the Altes Museum, one is reminded of how the Egyptians, naturally, had a Hellenistic period as well as a Roman one, as demonstrated by the extremely rare antique painting dating to 140 AD and known as the “Mummy Portrait of a Wealthy Woman”: pearl necklace, matching earrings, curly hair softly done up in a kind of beehive, an intense gaze and the extremely elegant air of aristocratic Rome, even if we are dealing with an Egyptian woman…

And what is there to say about the greatly chaotic history of Cyprus, that Mediterranean island that was home to Aphrodite, the goddess of love, with its Greek, Assyrian, Egyptian, Persian, and Roman heart, which is recounted in room 106 of the Neues Museum? Or of the magnificent Market Gate of Miletus in the Pergamon that has been completely and courageously reconstructed after intense discussions, a splendid Roman-Hellenistic work richly decorated with Corinthian columns and abundant floral-cloth motifs spilling onto the frieze which was erected on the, at that time, thriving western coast of today’s Turkey during the era of Hadrian, that bearded Roman emperor who at all costs wanted to resemble a Greek philosopher?…And so on and so forth, from one trespass to another, from one reshuffling to another…

Walking around this island, therefore, in and among various archaisms, classicisms, and decadentisms, we have the precious possibility of entering into the flow of peoples in a complex way, certainly, but also in a gentle way and with the possibility of being able to read history as a vast and harmonious continuum, platonically enjoying the eternal appeal of our human affairs.

But let us remember that when they say “Greece” the implication is only the Pergamon Altar and so remember that this represents only a late moment in Greek art in Asia Minor.

In the first rooms of the ground floor the Altes Museum immediately makes it clear to us that, up until the 7th century BC, the ancient Greeks still simply worshipped the gods out in the open…Zeus in the mountains, Poseidon in the sea, Demeter in the fertile plains, Athena in the city and so on…

And so, when one says Greece it too is a word with a thousand meanings and today we simply want to suggest that we should exercise our ability to see by shaking off one piece of cultural baggage too many. That stated, let us go ahead and have a look at this gorgeous altar, even if only imagining it.

An extremely important attraction for the museums, if the Pergamon Altar – excavated in 1878 thanks to incredible fortune and relative ease in the Turkish city of Pergamon (today the city of Bergama) and transported immediately thereafter by a long train ride to Berlin – has long presented herself to cameras of every make and style and has listened to guides talk themselves hoarse in all the languages of the world, if she remains a bit sure of herself, how can we blame her? She is the Pergamon Altar, one of the largest and most beautifully conserved pieces of Hellenistic art in the world, a piece of art, in other words, that comes from that extremely cultivated, mature, and well-known Greece which, outside of its own borders, was known to be on the edge of its inevitable decline and ready to be swallowed up by the decomposing germs of the barbarians.

Up in the high city of Pergamon, we shall still have to wait almost two centuries for the birth of Christ, the monotheistic God Father who still is sleeping in the galaxies of time while on this frieze that runs around the entire length of a giant, almost 20-meter (65 foot) stairway is depicted the mythical and extremely modern battle between gods and giants, between order and chaos, law and brute force, good and evil.

The Greek gods, to tell the truth, are not exactly angels, like the good Christian God to come. They didn’t get sick, get old, or die and they enjoyed both power and an easy life, but as to passions they had many and many more than humankind. Literature has brought us infinite soap-operas full of jealousies, betrayals, incestuous relations, homicides, torture (like that of poor old Prometheus we mentioned earlier), and other horrors…

Here on this frieze, however, the story is supposed to be instructional to all and through its reliefs of heroes, gigantic gods, semi-gods, and animals it is successful and is so with a sense of awareness, sense of drama and mastery of perspective that leaves us breathless.

The figures step almost three-fourths out of the background with amazing plasticity and, though the reconstructions are only partial, the perfection of the pieces makes the incredible realism of the particular details clear: the abdominal, back, biceps, pectoral and gluteal muscles of those bodies engulfed in battle, the horses’ hooves sprouting out between the human arts, helmets and buckles, coiled serpents, the heroes’ curls and hairstyles, the scales of reptiles, horses’ manes, breasts swelling against tight clothing, tendons, talons, buttocks, military cloaks held tight with cords, fish gills, gloves with slim fingers, the bit and nostrils of horses, terror, rage or suffering in the eyes in a crescendo of pathos and energy.

If you consider that at one time the figures in the frieze were also brightly colored, this 120-meter long story almost becomes real.

What is difficult to imagine, however, is that even the gods, semi-gods, giants, heroes and animals were all transported to Russia after World War II and remained there together with the so-called Praying Boy and thousands of other celebrities until 1958.

Priam’s Treasure, however, is seemingly so well placed in Moscow that it has decided not to go back to Berlin.