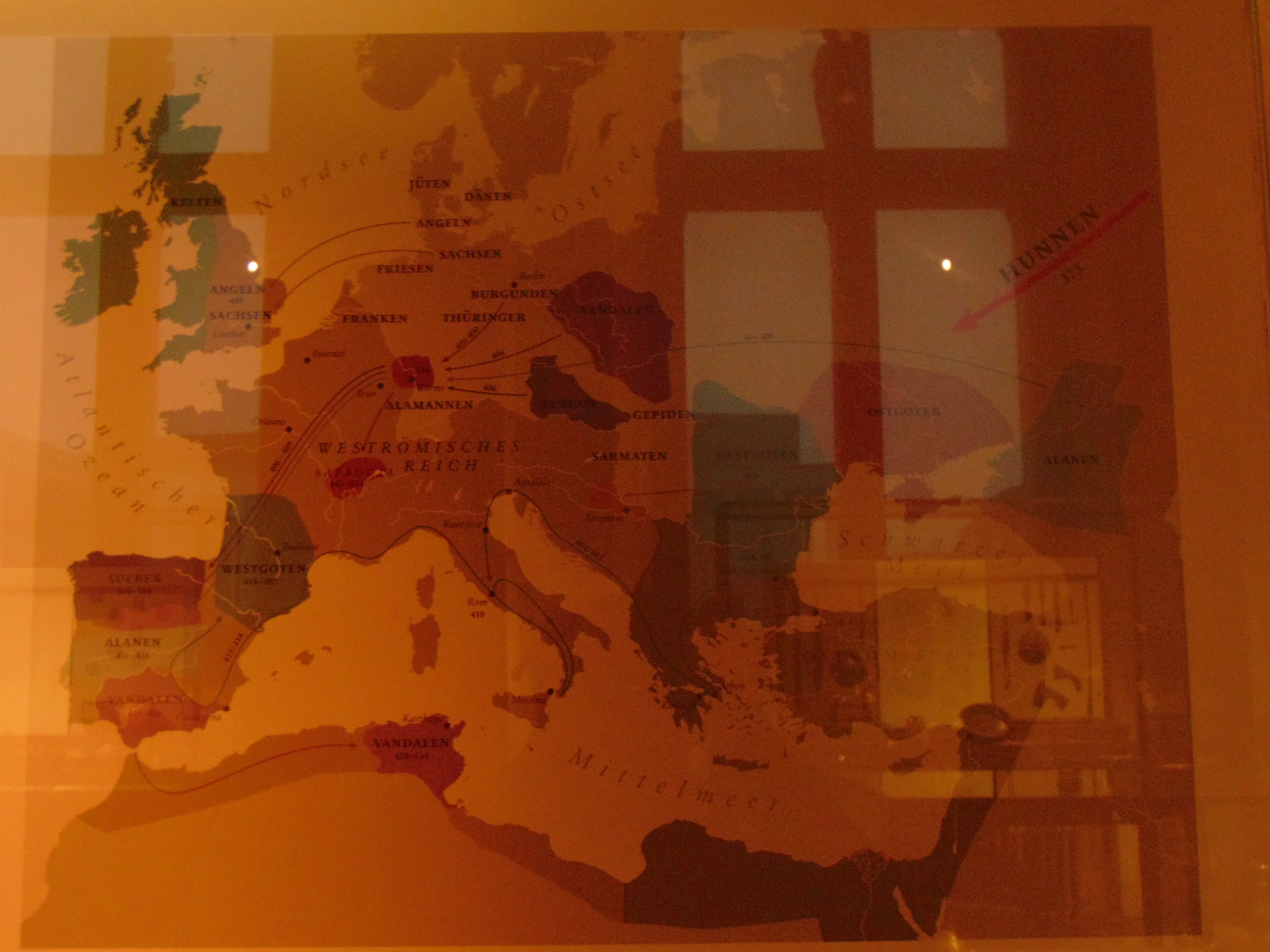 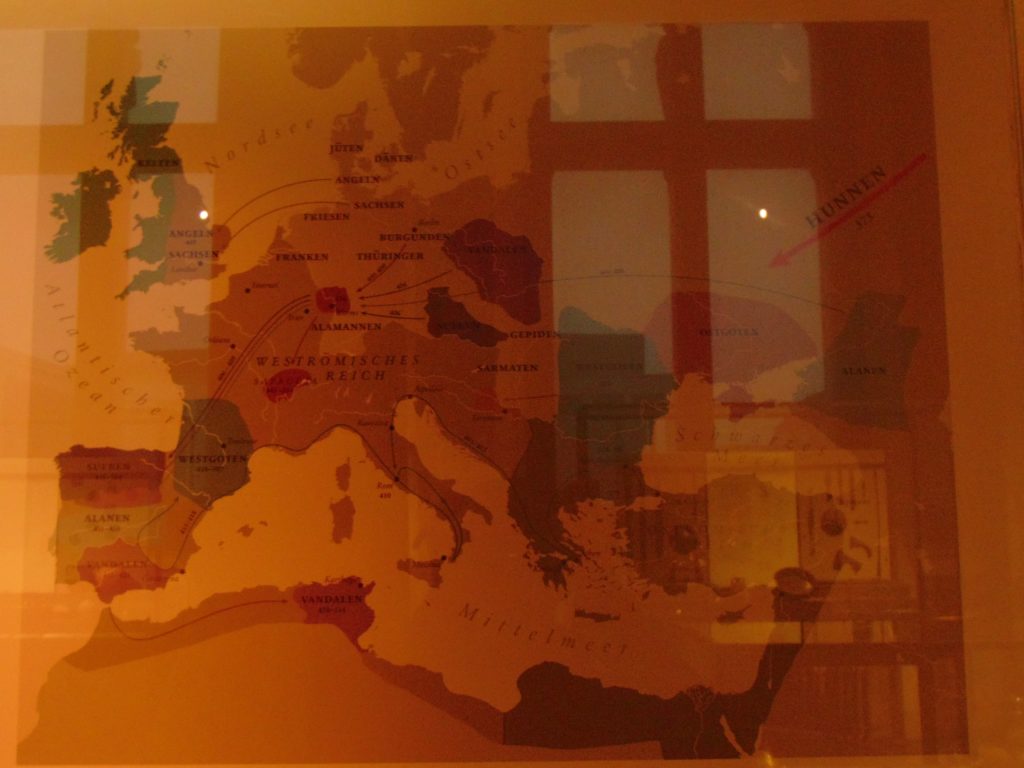 The Germans were in their way quiet in the green of their woods until the Romans arrived with their desire to conquer a good part of the territory.

It seems like you can see them here and there, in Room 204 and in the other beautiful rooms of the Neues Museum dedicated to them, while they are seated at evening in Germanic silence to enjoy their Abendbrot, in bronze bowls, with their long and well-cared-for hair, the pride and status symbol of the nobility, no circuses, no theatres, while the chaste women milled about without even a hint of makeup, carrying their babies on thieir backs, sewing with rudimentary hair and when they wanted to dress up even in the third century after Christ they’d make necklaces of bronze, solid and rigorous, no stones, no colors, no shine.

In Thuringia in the 5th and 6th centuries AD women’s shoes were still simple slippers shoddily held together with laces. If we consider how already millennia before the vivacious noblewomen in the south would pour water from splendid glass carafes into silver chalices, how they would choose little brushes for their makeup, blend their turquoise, black and red toned eye-shadow, paint their lips, admire themselves in the mirror, apply perfume and ointments and drapes themselves in necklaces and bracelets of colored stones, we get an idea of diverse people’s various means of clothing themselves and just how far back these traditions are rooted.

In Germany Roman domination over the centuries spanned all the way to the Elbe River, but it is really up until the Rhein that it was able to best consolidate itself, leaving a profound influence on the sartorial habits of the people of that region.

A display case in Room 206 shows us the difference between the feminine belts in the 6th century being used in Franconia and Thurinigia, explaining how the apparel of the Franconian women remained elegantly influenced by Roman customs for a long time, while those of the Thuringian women always remained more simple.

Passing on to the Neues Museum we understand that the history of civilizations in reality is structured on times that are much longer than those we are used to considering when we observe contemporary phenomena or those of the decades that have most recently passed.

The more we enlarge our temporal horizons and the more we indulgently stretch out our arms, we can manage to intuit the causal connections that guide people’s behaviors, one next to the other, and their admixture in the great human adventure.

We could even launch ourselves into preposterous speculations on other possible histories, asking ourselves how Germany might have been without Martin Luther, or imagining, for example, that Savonarola would have enjoyed incredible success in Florence and succeeded in reforming the moral habits of his fellow citizens and that a wave of honesty and virtue would have nourished the entire Italian peninsula for centuries and so on and so forth, dreaming…

Immediately upon entering the Neues Museum the first room to the left on the first floor is dedicated to the Germans, Room 102 of the section once known as that of the Vaterländischer Altertümer (Antiquities of the Fatherland), the same room where we encountered the Norns earlier. On the walls are scenes from the Germanic sagas with Nordic gods like Odin, the father of the gods (though badly damaged in World War II), who is seated on his throne in the fresco of the fourth lunette to the right above the window with his crown of glowing horns, an arm at his side, his brow knitted with worry as he listens to what the two crows Hugin and Munin are telling him has happened on earth. Thor, the extremely powerful god of thunder, is in front of him on the fourth lunette to the left before a chariot being led by a ram running on a cloud. He is wearing a helmet and a leather cloak, iron gloves to protect himself from his own hammer that casts lightning and a magical belt that doubles his strength and if this image is a bit frightening at his side there are seven elves playing and dancing along the shores of a lake in which the moon and its glowing stars are reflected while two others carry their queen in their arms.

On the opposite side of the room, above the door, strapping Valkyries accompany the valiant spirits of dead warriors to Walhalla…Nature, justice, war, and music in Germanic harmony.

The fact that for many today this glorious hall is simply a means of getting from one place to the cafeteria or to the mythical treasure of Troy (of which little actually stayed behind in Berlin) is telling. These days no one gets excited about Thor, Odin, or the Valkyries, who almost seem to be in a phase of serene transition, even if the contemporary Germanic thread still gets passionate about woods and dances, the latter quite likely has more to do with Latin-American floats.

We’ve already had the opportunity to observe how the various historical epochs gradually are considered by scholars in different ways, a sign that every context in which we position ourselves and from which we consider others is nothing other than a point of view influenced by the spirit of the times, often made obsolete and rightfully so by later considerations and discoveries.

At a certain point of destiny, at the beginning of the 19th century, for example, among German intellectuals there was a strong propensity for considering medieval history as the origin of the idea of Germany and with that the Middle Ages were elevated to being the true mythical foundation of the entire German state.

The theme awaiting us in Room 206 on the second floor of the Neues Musuem is that of the Middle Ages and the Migration of Peoples. If we mentioned that the Germans were in their own way mellow before the arrival of the Romans, the end of the Roman Empire ushered in an extremely confused and rough period of time.

Everyone went everywhere and even were to remain a whole day in Room 206 to trace the colored lines across the maps, in the end, we wouldn’t understand anything. If the Middle Ages are truly the foundational myth of the German state, well let us then solemnly state that the German state is founded upon the myth of chaos. The Huns arriving from the east in the 3rd century crushed the Goths, throughout the 7th century the Slavs moved between the Elbe and the Oder Rivers, the Avars – Asiatic nomads on horseback – raged like madmen, while the Saxons, Thuringians, Fresians, Franconians, Swabians, Bavarians and Germans took their lumps and handed them out left and right…The Romantics of the 18th century, lovers of beauty and the revelation of divine perfection as reflected in nature, probably didn’t intend to take into consideration that pandemonium that was the Middle Ages but rather that later age of the great cathedrals, that of Friedrich Schinkel’s 1815 painting “Gothic Church on a Rock by the Sea”, for example, on display in Room 3.05 of the Alte Nationalgalerie: two knights nobly galloping toward the sea, the ultimate goal of eternity, and the extremely high spires of the church ambitiously rising into the sky and toward God.