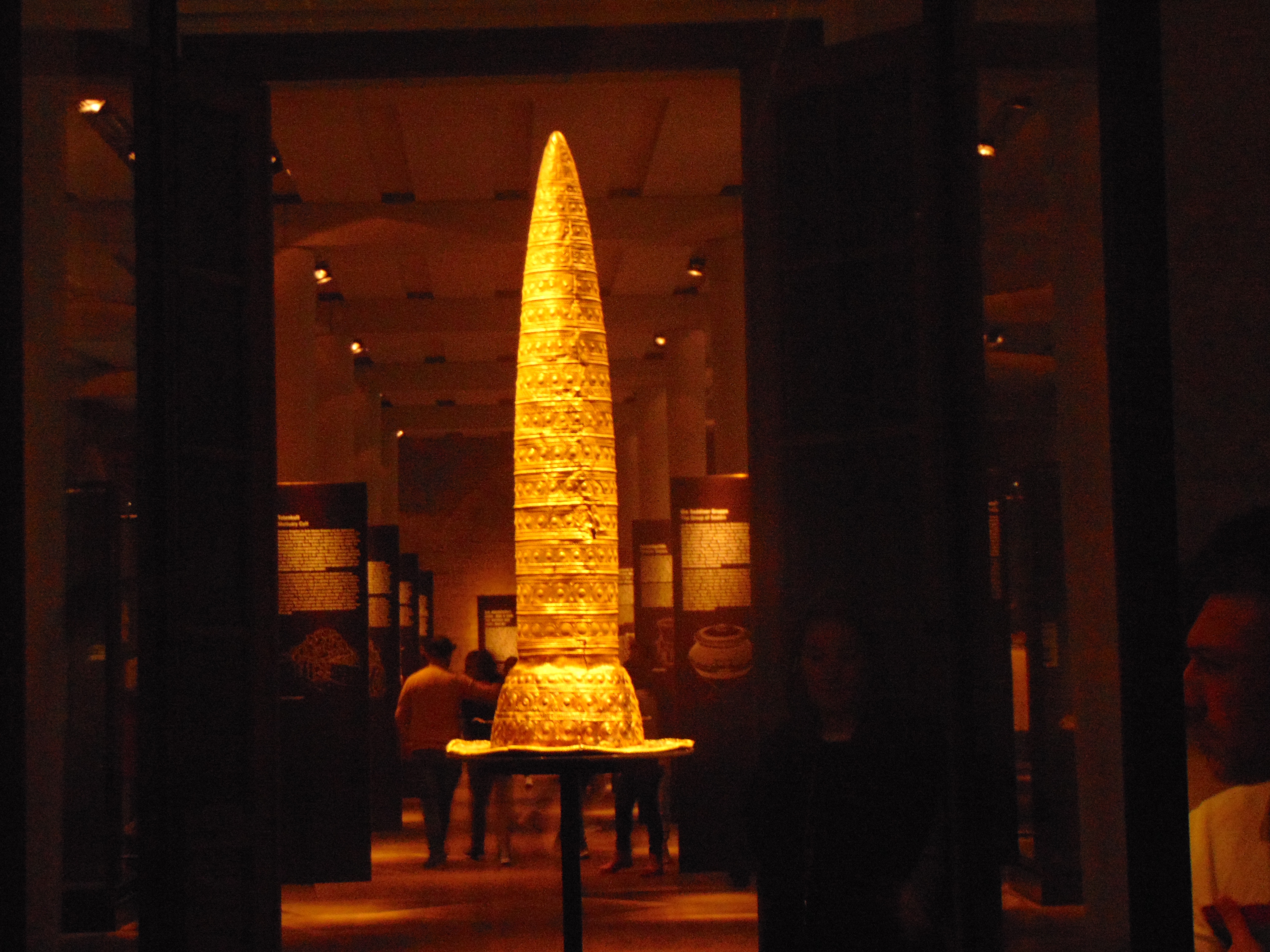 To recount the history of humankind you’d need to know a few facts, at least a few principal ones, and be able to organize them well into a narratological, and possibly even chronological, thread. The plot would necessarily be complex because many things have happened, and we wouldn’t have any real idea of where to begin.

But maybe the Norns could give us a hand, those three Nordic divinities who from time immemorial have been concerned with weaving the web of humankind’s destiny, patiently intertwining the thread of every single human being with that of every other. Moreover, we have the good fortune of having them completely to ourselves on the first floor of the Neues Museum, in Room 102. Miraculously having survived the Second World War, they remain frescoed in the second lunette of the window to the left.

We could ask Urd (“fate”) – seated at a spring together with her two prophetic swans, inscribing the runes of past things and disclosing some still unresolved mysteries – something like who really wrote The Illiad and The Odyssey and whether or not Homer even existed. We could ask Verdandi (“necessity”) to illuminate the incomprehensible thread of our present and Skuld (“being”) to make sure to water mythical Yggdrasil, the world-tree with its roots in the realm of the dead and its branches in paradise, so that we won’t receive any other terrible surprises in the future.

Knowing we weren’t alone in the business of understanding history with a capital “h” would be a great comfort and would certainly warm our hearts (and, furthermore, the hearts of the Nordic peoples seem to be discretely trustworthy partners). However, the thought of having to confront the concept of duration is particularly anxiety inducing. Whenever time has a precise pulse, like the beats of a serene heart, almost all of us – with the exception of pathological cases – for the most part feel secure, just like how we heave a deep sigh of relief when we are able to fix it within a single date. From out of the depths, however, our true soul will always remind us of some cleft or other within ourselves and that time – in addition to containing a certain number of regular human and divine affairs for us – enjoys its own free and pure natural state that has nothing to do with our experiences or the weaving of the Norns. And, moreover, listening to this profound voice would mean trying our best – here as well – to happily and playfully leave time alone to chase the fleeting stars throughout the infinite galaxies.

But don’t worry: we won’t allow ourselves to be overtaken by a cosmic angst here! Or rather, we will indeed swim around within the cosmos, but unconsciously and in a light-hearted way.

“Time is the fire in which we burn” Star Trek: Generation’s Dr. Soran once said (quoting the poet Delmore Schwartz), all nasal voice and intense gaze. But Dr. Soran and the gods aside, throughout all times and cultures dozens and dozens of outstanding minds – whether philosophers, mathematicians, physicists, or just thinkers in general – have concerned themselves with investigating the concept of time and with producing extremely intelligent theories. Depending on your point of view, they can be comprehensive and comforting or, vice versa, fragmentary and unsettling or even sometimes a bit of both and, quite frankly, incomprehensible. Much has already been written and said and many of these thinkers were so profound in their analyses that they lost the power of reason. But we require the power of reason – at the very least to make our tiring everyday obligations pass more quickly – and therefore cannot allow ourselves to follow the inclination of our souls and thoughts into the abyss of the philosophical mystery of time. We shall only mention in passing that time is extremely important, as, of course, we all know: children complain that homework is time taken away from playing and workers often feel like slaves to the clock. Whoever has time, indeed, enjoys a certain satisfaction, provided that he or she knows what to do with it.

In Room 202 of the Neues Museum, directly above that of the Norns and dedicated to Rome, we read that Cicero cleverly knew how to safely divide even free time into four precise subdivisions: that of celebrations and public games, that of entertainment for the body and for the spirit, that of feasts, and that of ball games and dice. In that way, the Romans, from the emperors to the slaves, calmly got by – cradled by their 180 annual holidays, theatres, chariot races, gladiatorial games and hunts – while at the same time giving a meaning to their lives by compulsively playing dice.

When we consider that the die, in Latin aleas, was intrinsically aleatory – that is, random –, we see that the existential equilibrium of the Romans oscillated between risk and rule, between the thrill of experiencing the incomprehensible movements of destiny and the anxiety of their continuous attempts to tame them (or at the very least question them), just like others had before them and likely will forever after.

Indeed, one of the first moves of a revolution or a dictatorship (to say nothing of a religion) is often that of taking possession of time by changing the calendar. Flipping through some of the official catalogues from our museums during the time of the German Democratic Republic, for example, you will notice Christ’s disappearance from the axis of history. The passing of the years in Berlin was socialistically accompanied by the letters v.u.Z., which stood for “vor unserer Zeit” i.e. “before our time.” Implying that ours was still the era of Christ but not allowing it to be stated was one of the numerous logical achievements of the regime, a solid exercise for the populace of scaling the peaks of contradiction. This, of course, rather quickly produced the unexpected, if predictable, collateral effect of the curse of the ghost of Christ unnamed; or rather, a certain profound religiosity, and maybe even the paradoxical theological rediscovery of the Second Commandment: Thou shalt not take the name of thy Lord in vain.

Appropriating one’s own epoch by modernizing the means of dating, we were saying, has always been one of the irresistible temptations for all the populations of history and possessing one’s own calendar a major reason for a feeling of security. As we know, all religions calculate time as to how they see fit; and there have been, for example, Jacobean and fascist calendars, neither of which prove scandalous any longer. Which is to say that now we can no longer pronounce today’s simple date with any sort of general certainty.

That the harnessing of time could be the key to having control over the development of many events and therefore an instrument of power was a definitively precocious intuition in the history of humanity.

We can find a beautiful example of power right here on our island in Room 305 on the third floor of the Neues Museum. We are talking about the Goldhut, the 490-gram hat made entirely of gold leaf that might remind you of the wizard Merlin. Its motifs recount a story that lasts 19 years; that is, the detailed story of the sun and moon which in their complete cycles find each other once again only every 19 years. This precious instrument seems to have been realized 1000 years before the birth of Christ in a time and place in which people still didn’t know how to write. They were, however, certainly able to observe the heavens for decades with immense interest and pass on the outcomes of those observations generation after generation. They drew a lot as well.

The oldest concept of time was incarnated in primitive humans by the sky and this is why today we still strongly suspect that time likely lives among the stars and that, if we want to approach it, we shall have to go and find it in the firmament.

Before this hat was discovered – before, that is, it suddenly popped onto the art-market in 1996 – it was believed that the first astronomical calendar was a work dating to 432 BC made by the Greek mathematician and astronomer Meton of Athens. But no, this newly arrived and incredible example of wisdom was, in fact, much older.

There are four of these kinds of headpieces throughout the world, and the one exhibited in Berlin is the most precious and important.

At that time, the access to astronomical knowledge, which served to foresee eclipses and to establish planting and harvesting times, was the exclusive territory of a select few who, for that reason, were respected and venerated as the powerful heads of religious and temporal power. The hat was presumably worn by these same people during particular ceremonies and, as high and luminous as it is, was doubtless able to be recognized from afar.

A golden calendar on one’s head as a symbol of power is certainly one of the most brilliant ideas humankind has ever had and even today we admire people for being bright. The fact is, however, that despite all our attempts to tame time, it remains untameable, indomitable and sovereign.

Such a statement, no matter how true or how cruel, calls for a soundtrack that respects it. Exiting the room of the Golden Hat we must therefore immediately press the button to the left at the foot of the imposing Bronze Age Horn in Room 306 that reproduces a shrill trumpeting sound mixed with a hail of metallic objects and the timbre of a slightly off-key trumpet and which served to accompany the most solemn moments of primitive man’s life. We are completely bowled over and vibrate with the sound.