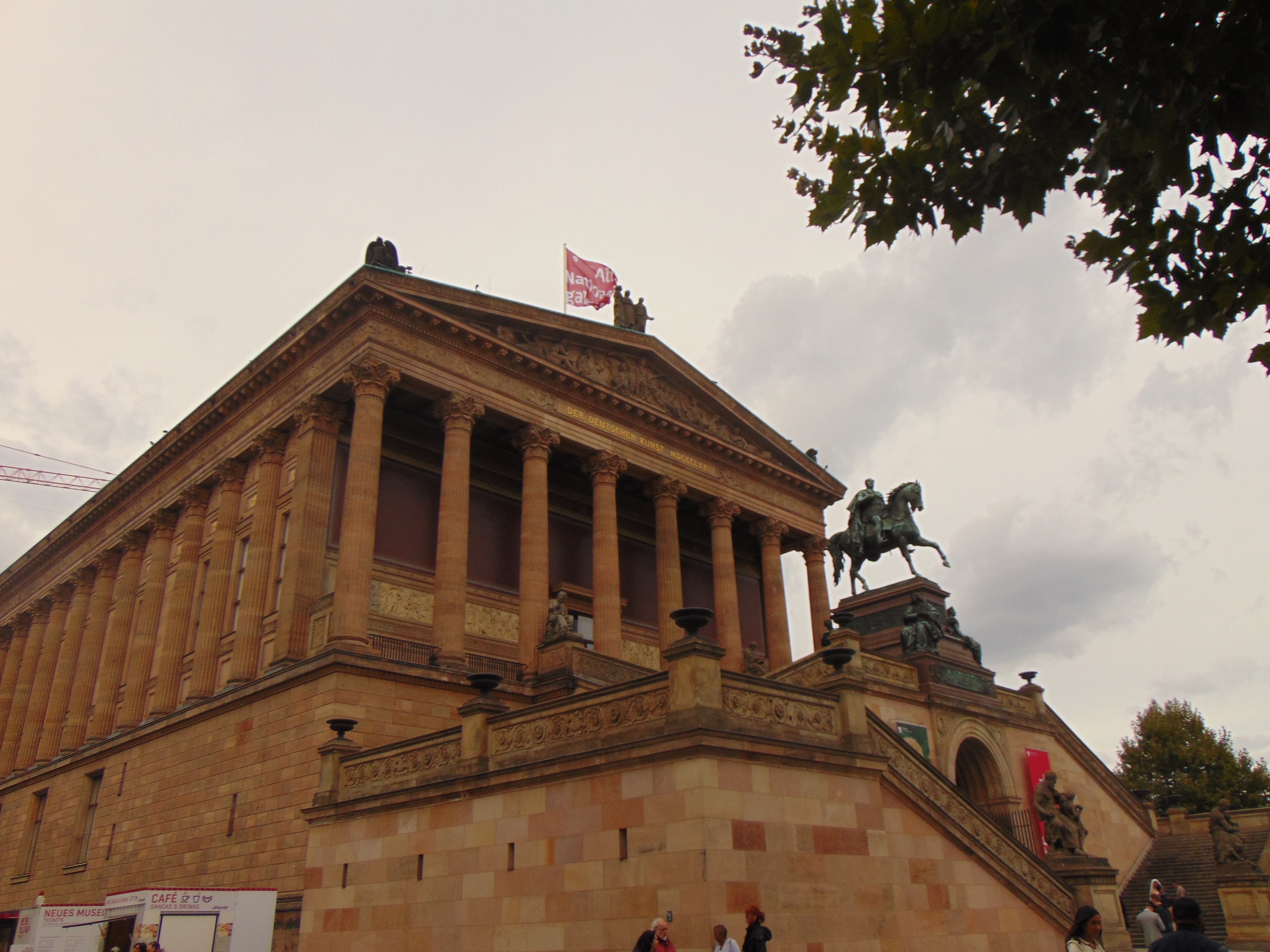 Waiting in line to enter the Pergamon Museum wasn’t always a waste of time. You could get to know new people, practice speaking other languages, and take apart – then immediately reform – stereotypes about some of the greater and lesser faults of various cultures as embodied by their respective tourists, those mass ambassadors par excellence. Standing around for an hour or more, you could share various stories and legends while someone complained about various aches and pains, the heat or the cold or the food, you could even exchange suggestions. At that point you’d often notice others who were isolated under a pair of headphones, some who were busy playing with their mobiles, some who were just grumbling, and some who were hiding behind their maps or newspapers but would now and again emerge to stick a pair of curious eyes into their neighbor’s face. Then, of course, there were those who were busy falling into each other’s arms and smothering each other in kisses…in any event, you had to accept this kind of international lay procession that was stopped in its tracks as if by a handbrake as part of a necessary experience and you could rejoice in the small steps of being closer to your fellow humans.

At the moment, however, everybody’s waiting comfortably at home for the most beloved and well-known section of the Pergamon to reopen in a few years’ time, after its umpteenth colossal renovations. And those who remain of the opinion that years are long will learn that sometimes time indeed can pass by pretty quickly. When the Pergamon reopens in its entirety, there will no longer be any lines to get in, for it will be connected to all the other museums by tunnels and halls. Rivers of visitors will be able to flood all of its rooms simultaneously like liquids through a set of communicating vessels. These rivers will flow back together in conference rooms, regather their strength from the strains of taking in so much wisdom in specially designed areas, and pass rather fluidly beneath the colonnades just like the ancient philosophers once did. These columns, named after entrepreneur James Simon, however, will be so slender that you’ll be able to catch a glimpse of a different kind of future, one that exists beyond the point we are standing today.

But then, after a little while, no doubt the unstoppable need to change the way of using the space where the objects recounting history and humankind’s thoughts are displayed will return and the museum will be renovated yet again. And then again, and again, all the way up through the end of time and history itself: humanity, works of art, archeological finds, and museums all disappearing in one ultimate big bang.

Let us hope that that time is still a long way off in the future so we can keep ourselves busy here with ordering and cataloguing facts, artifacts, and humanity’s various offenses.

Throughout these pages we will simply take a curious meander about this one-kilometer-square island that contains bits and pieces from all the phases of humankind’s history, maybe we will even find something of interest and thus be able to reflect a little on slowness and speed, on the dialogue between present and past…empty reflections, of course, but just like that, just to talk, like you would in any old line with any old people to trick yourself into thinking that the year-long wait wasn’t really all that long at all. Once we’ve finished with our little speculations, we’ll no doubt realize that the island is by no means closed, but, on the contrary, quite open in terms of its themes, its itineraries and, above all, the conversation between times; and then, just maybe, we’ll also realize that a few years have already passed and that it seems like only yesterday we were standing in line.

Considering this extremely harmonious area of museums with its five eloquent and elegant buildings from this perspective, it might seem as if it’s always been this way, where “always” naturally implies something rather vague; in this case, a little pile of a few dozen lustra or so.

And yet, even the classical is a teenager here in Berlin, an adolescent only a little more than two hundred years old. Our city may have many faults, but every time it gets it into its head to build something, it does so with gusto and never holds back. Taking something apart in order to energetically build it once more is without a doubt Berlin’s specialty, maybe even its condemnation, its demon, but it is also what makes it fascinating and is probably its historical destiny. At the time when it decided to create the Museum Island, the Prussian capital was particularly feisty, driven, and enlightened and the result proved to be glorious.

The island’s five buildings have all been more or less done in the classical style, but with immensely modern dimensions and from the beginning some of them were meant to contain major architectural finds that had never before been displayed indoors. Some of the others would only discover this vocation a bit later on, however, and not without their share of distress. Naturally, impassioned debates erupted among the more conservative minds, which did not care to see large monuments presented in the rooms, and the more innovative ones, ready to fearlessly challenge the times.

As a result, today we have these huge museums – fresh and enthusiastic, most certainly solemn, but also very new, beautiful and bombastic –, which allow us to comfortably get closer to that summa of human history with casual elegance. And so we shall flutter about here and there, stopping now and again to hyperoxygenate ourselves with long, inspirational pauses, only to once again passionately take off at a run, just like history at certain times, or to unexpectedly linger on a particular detail, quite possibly banal, but revealing or, even better, revealing of nothing at all and therefore even more interesting.

Thus we shall move ahead in an erratically programmatic way like musicians playing a tempo rubato (literally “stolen time”): an expressive and open tempo jumping from here to there, temporarily disregarding a strict tempo in order to speed up and slow down according to the musician’s whims. Every year close to three million visitors come to this oasis looking for something and today it’s our burning desire to align ourselves, at least with our playful thoughts, with this multitude. If thereafter we truly want to launch ourselves into the effort to visit the museums ourselves while at the same time not feeling all three million tourists at our backs, we can allow ourselves the luxury – similar to what you see in five-star hotels’ publicity films –, or rather the presence of mind, to show up at opening time when museum workers outnumber visitors. This way we’ll be able to enjoy the inexpressible sensation of privilege, of direct and exclusive contact with the beautiful and, furthermore, be able to note that during these first minutes of work the personnel – who are always very friendly – are even particularly welcoming.

And to think that, when the Altes Museum first opened in 1830, you could count the number of daily visitors on your fingers and that the director personally accompanied them once they had been helped out of their overcoats and hats! Today, however, even if you show up at such a good time, you’ll have to take off your coat yourself and put your things into a locker for a euro.