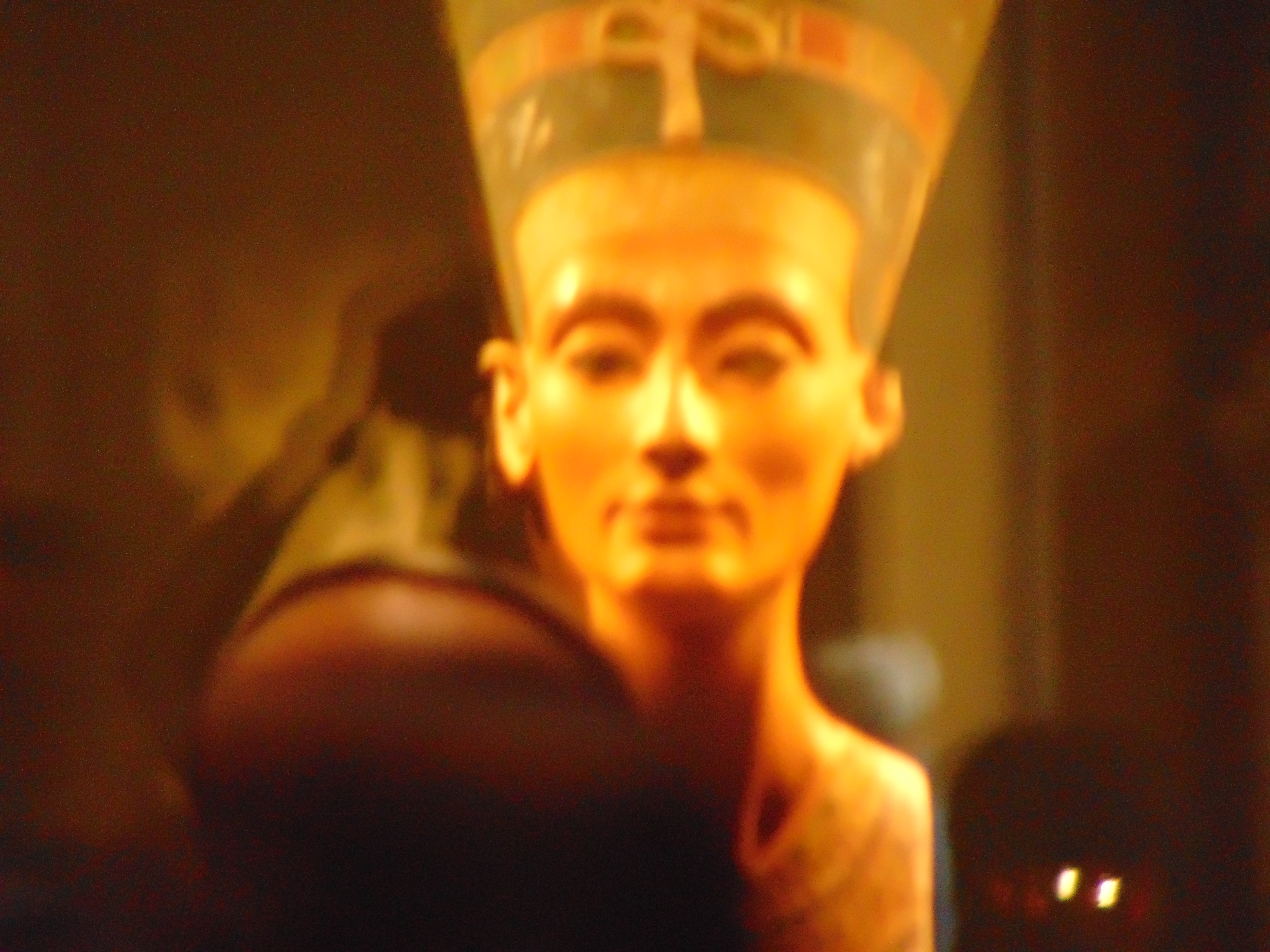 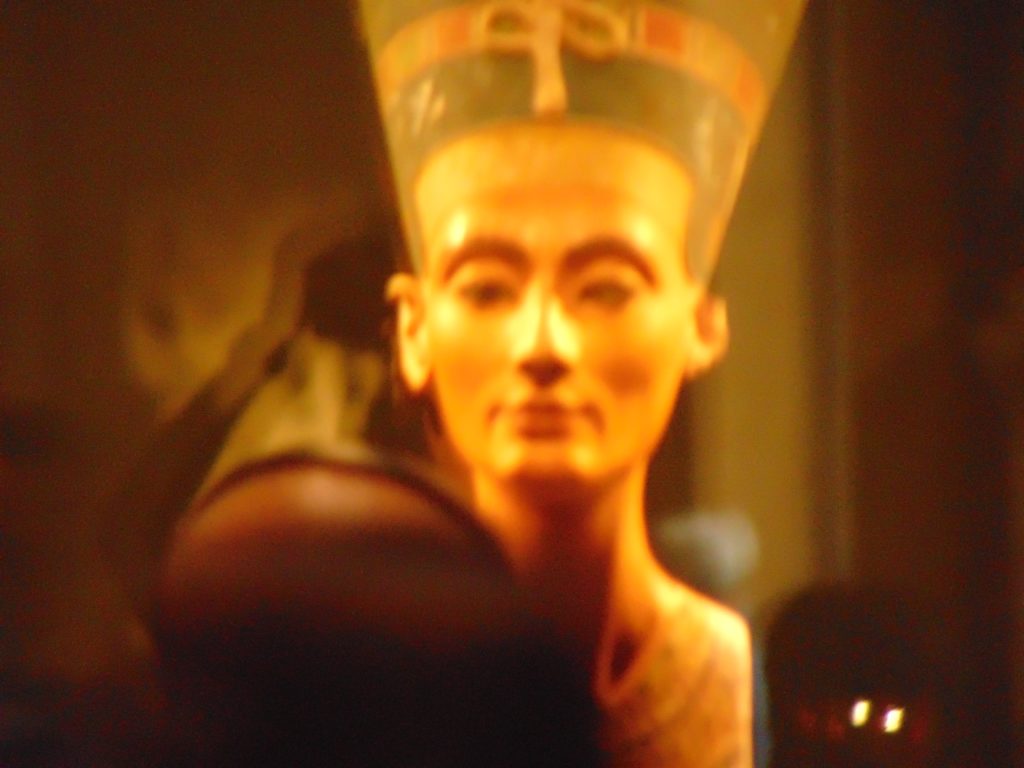 Egyptian civilization was certainly one of the most important and fascinating civilizations of all antiquity and this might be why it’s disappearing from the scholastic syllabi of young citizens of Brandenburg.

This might seem to be a contradiction or worse still a criticism, but we who weren’t born yesterday suspect that it’s got something to do with an educational tactic scientifically elaborated by extremely fine minds to generate interest in their pupils. As we know, whatever is prohibited creates a primordial and morbid curiosity in both the young and the old. Our children therefore might subliminaly become impassioned Egyptologists even if only because Egypt would seem to be some kind of virtual reality, science fiction or, better yet, taboo.

In Room 111 of the Neues Museum, just to the right of the entrance, knowingly called the Prologue, we realize that over the last few centuries there have been repeated flashes of Egyptomania, from ancient Rome taking home various obelisks as souvenirs to the rediscovery of Egyptian civilization during the Renaissance, to the unflagging work of the German Atahanasius Kirchner who in the 17th century attempted to decipher the hieroglyphs, to the Napoleonic expeditions that excited all of Europe and that began to produce porcelain and furniture in pharaonic styles, and, finally, to the deciphering of Egyptian script on the part of Jean-François Champillion in 1822 and the passionate work of the Berliner Richard Lapsus who would not rest until such a large collection began to be amassed in his own city…

Having a look around we can see good indications of why the next wave of Egyptophilia may flare up once in the Berlin of the 21st century.

Becoming impassioned by Egyptian civilization our children could learn from these true masters of time – who didn’t make too much of a distinction between life and death and who considered all periods of time as a series of innumerable cycles – to love infinity and all of humanity would therefore miraculously go beyond the linear limits of time.

Though this might seem like useless philosophical speculation, we should not ignore its potentially practical, local applications.

At first our children would feel an irrepressible draw to archeological excavations and would begin to go crazy for seeking evidence of a pharaonic past even in Brandenburg (since they aren’t all that strong in geography either) and, not finding it, would begin to ecologically take advantage of their now useless sites to construct pyramids with countless rooms for their own journeys into the beyond and in this way maintain the notorious Berliner real-estate bubble up through the end of time and to the infinite joy of global investors. And indeed perhaps this could be the true long-term goal of the ministerial programs for grammar schools, who knows?

Be that as it may, Ancient Egypt is present on a massive scale in the Neues Museum, which displays artifacts of the most ancient civilizations.

When you hear the word Egypt you likely first think of pyramids, but in reality the history of Ancient Egypt already spans millennia and thus helps us to immediately expand our narrow temporal horizons and give ourselves a real workout as to the immensity of time.

In Room 109, known as the Thirty Centuries room, three millennia of this civilization’s history are synthetically illustrated but even three millennia aren’t much as far as Egypt is concerned. The period of the pyramids itself was a fertile and marvelous one that unfolded between 2700 and 2200 BC, but the civilization on the Nile began to develop much earlier; in fact, 25,000 years before the birth of Christ and, according to recent studies, already in the Paleolithic era, and continued on long past the period of the pyramids had ended.

After that time came the Middle Kingdom, a number of centuries that saw the great flowering of literature and which was followed by the New Kingdom, a time of political expansion and invasions, and finally arriving at the so-called Late Period when, still three centuries before the birth of Jesus, this great and long-lived civilization was indubitably conquered.

Up until now historians have counted a good thirty-one reigning dynasties throughout the arc of this time. At the Neues Museum the scope of Egyptian civilization is represented through three levels of artefacts.

There is a an underground level, a ground level and an upper level all for the most part dedicated to Ancient Egypt and arranged according to a chronological itinerary that largely unfolds from bottom upwards. On the lowest floor we the dark and low red-brick vaults recall crypts and tombs, while the cats with their wide eyes, the crocodiles, and serpents tell us about the everyday life of the Egyptians all the way the most ancient times, times in which those very same cats, serpents, and crocodiles were feared and revered as gods.

Sarcophagi of every size and shape remind us of how important preparing yourself for the journey beyond was. These were the times when the use of precious and colored stones was diffuse, stones like turquoise, imported from the Sinai together with the beautiful, clear green malachite, Afghan lapis lazuli, the desert red carnelian…

Then came the times of porphyry, alabaster, amethyst, obsidian, rock crystal and rubies…

If we think of the New Kingdom we above all can see white, green, red and blue and then the synthetic ceramics, a sign that the importation of precious stones was becoming ever more difficult…

At the apex of Egyptian history in the heavily-visited dark of Room 210 is displayed the famous Bust of Nefertiti, a symbol of the Museum Island and often of all the museums in the city as well. What could possibly be added to all that which has been said about Queen Nefertiti?

Nothing, it’s better to simply contemplate the perfection of her beauty in silence and observe how hers has managed to elude all fashions and times. Already her discoverer, the archeologist Ludwig Borchard, financed by James Simon, in 1912 said: “There is no point in describing her, you must simply see her!” And, in fact, James Simon kept the queen for a long time to himself at his home in the Tiergartenstraße before donating her to the museum.

The rules regarding beauty are probably much more fixed than we think and seem to obey rigorous geometric proportions.

Many little details render a bust harmonious: the long neck – they say that the queen’s seventh cervical vertebra, as prominent as it is, is a unmistakable sign of aristocratic beauty -, the high cheekbones, the straight nose, the graceful chin, the long line of her eyebrows, the perfect insertion of every single muscle, the pink of her skin, the red of her lips, everything contributes to the perfection of her face. Queen Nefertiti’s beauty owes a lot to the delicacy of her features, soft, but essential; her tendons and muscles are toned, her face is lively but not tense and everything that would be excessive has been eliminated with care. It is a beauty that originates effectively more from a taking away than addition and this is why it seems to energetically bloom forth from within.

Today we also know that charm is far and away more seductive than beauty and the lucky Queen Nefertiti without a doubt possessed both. They say that her personality can also be read, for example, in this bust in the small wrinkles around her eyes which liven up her glance.

When in Room 209 we see the early attempts at making Nefertiti, those incomplete studies of faces that drew in eyelids and eyebrows and reduced the upper lip with black brush strokes which seem to be the sketches of modern-day plastic surgeons, or another unfinished princess’s head with the back of her head pushed far to the back as a sign of beauty, we understand that the final bust of the queen was the result of a long process of work.

Nefertiti is fascinating, in addition, even when she is represented as an older woman in the standing statue, also in Room 209. Her posture with her head pointed forward, typical for the time period, does not hide her drooping breasts, her protruding stomach, her full thighs or the wide hips of a no-longer young woman who has been a mother multiple times.

Such a noble and refined people knew fully well how to consider beauty both in its eternal ideal and in its quotidian human reality.