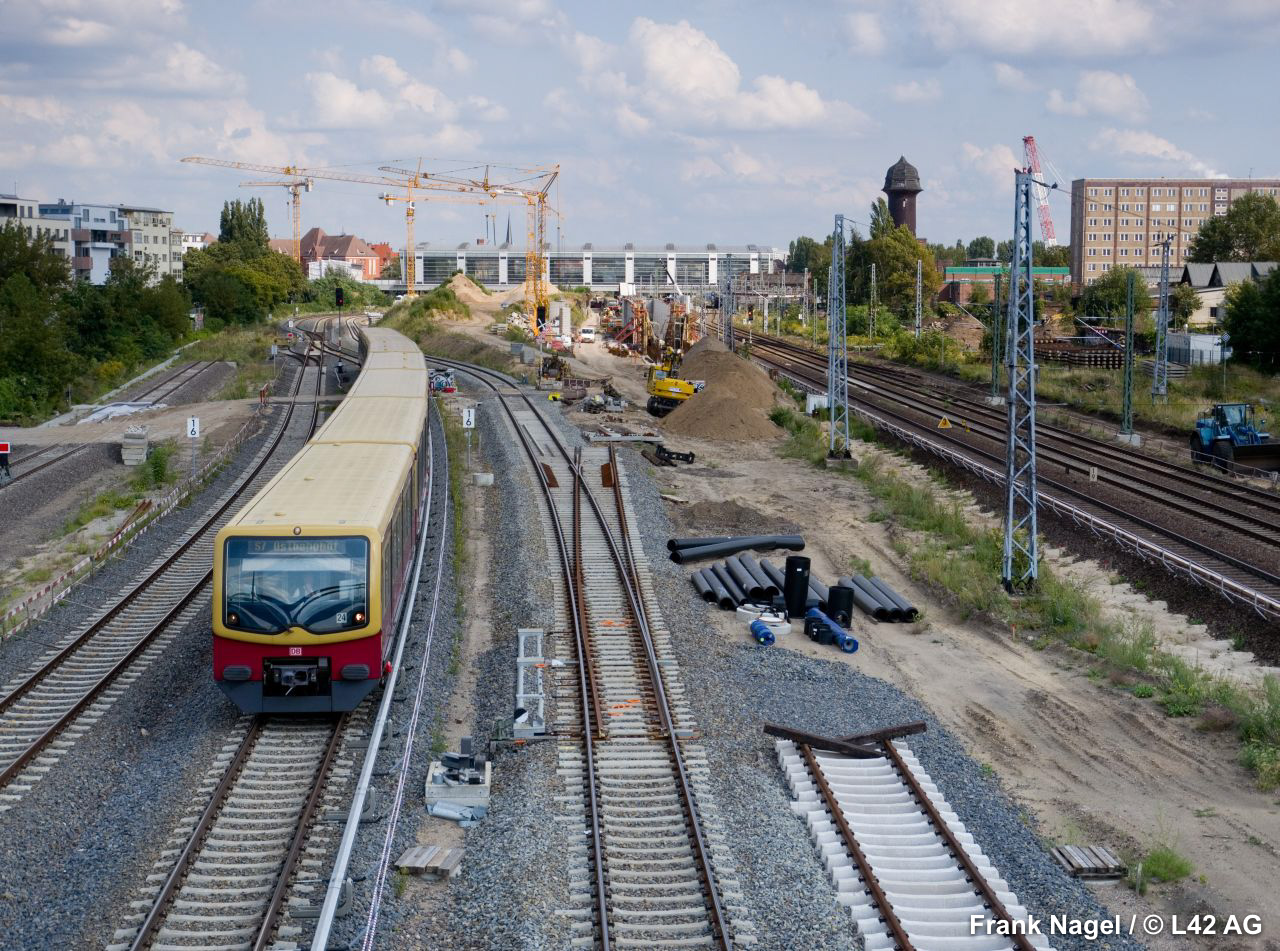 The S-Bahn is the urban line whose stations are easily recognizable by the white S on a green background as opposed to the subway’s white U on a blue background. This symbol was officially born on December 1, 1930, and was a source of great joy for all of the city’s inhabitants. The trains were already electric and took people everywhere. The capital had truly become a metropolis graced by progress and modernity. Lines continued to be built up until the eruption of the Second World War, which, however, still was not enough to stop the Berliners from using, as well as loving, their S-Bahn. That is, not until it was heavily bombed between 1943 and 1945.

In the shock of the devastation it was decided that one of the most immediate priorities of reconstruction should be putting the S-Bahn back into service. Both food and fuel were truly scant in that terribly cold winter of 1945, but it was of utmost importance that the trains return. You can understand just how much the railways represented the capital’s beating heart when you see how quickly they were brought back to life. A special reanimation squad was called in not unlike those who try to bring a patient with cardiac arrest back to life. Some adrenaline, a few shocks, and the trains were back. Berlin was saved. The rubble may still have been smoking, but by the end of 1945 some 216 kilometers (134 miles) of tracks had already been replaced. Even if they were dying of hunger, the Berliners could at least get from Schöneberg to their beloved Wannsee once again for a swim.

By 1947 the north and the south of the city were connected once more. Then the city was divided into sectors, and the Allies left the railway system to the Soviets. In 1949 the S-Bahn went from being a part of the Reichsbahn to being a part of the Staatsbahn, the state-owned railway of the newly born German Democratic Republic, but not without a series of arguments on the anomaly of a public transport service being run by the GDR alone.

Throughout the 1950s the railways were a major means of escape from East Berlin. With the construction of the Wall on August 13, 1961, the S-Bahn’s tracks were definitively interrupted. Some stations, like Friedrichstraße, became border posts where you had to undergo a labyrinth of checks before being able to travel on to the other half of the city. The building next-door was nicknamed the Tränenpalast (the Palace of Tears) as it was there where many people forcibly cut off by the Wall had to say goodbye to one another. The two tracks of Friedrichstraße were reunited only on July 2, 1990. Today the Friedrichstraße S-Bahn station is quiet and elegant and bathed in natural light, which streams in through the large windows. The Palace of Tears hosts social and cultural events, though its long corridor of shops at street level remains dark and retains something of a slightly dark and claustrophobic air.

West Berlin began to boycott the use of the S-Bahn with many official slogans like: “Keine Mark für Ulbrichts Stacheldraht,” that is, “Not a single mark for Ulbricht’s barbed wire” with which they meant that any use of the S-Bahn was a way of financing the division of the city. The boycott proved tough. West Berlin did everything it could to substitute the convenient railway lines with new bus and U-Bahn routes in order to discourage citizens of West Berlin from using the over-ground train. At that point, the S-Bahn was practically used only by citizens of East Berlin (who also had to remember to buy a round trip ticket because a return from the west was far too expensive). In West Berlin the S-Bahn was made fun of with names like the Schüttelbahn, where “schütteln” means to tremble, stagger, but also to shiver.

There were few voices that spoke out against this stance (and the few that did remained, for the most part, unheard). One of these, however, was that of the writer Uwe Johnson, who believed that the political boycott weighed far too heavily upon the population, which was forced into paying for the bus and the U-Bahn, both of which were both more expensive than the S-Bahn and less convenient. In short, a harm to the city. The result? He was boycotted too.

The war West Berlin was waging against the S-Bahn brought ever greater deficits and disruptions to the city. The unused or mostly unused stations were ideal places for drug trafficking and criminality and West Berlin’s
former S-Bahn stations became grim places indeed. In September 1980 the railway workers of West Berlin announced a major strike, and the GDR took advantage of the situation to close many of their unprofitable western stretches. The strike in West Berlin grew more serious, and East Berlin finally ceded twenty kilometers of tracks to the western BVG to run.

In 1981 there was a heated electoral campaign on the subject of the S-Bahn. All of the sudden West Berlin wanted the S-Bahn back as if this could solve all of its traffic problems. It was almost as if the BVG’s ferocious boycott of the Schnellbahn had never been, and there was nothing at all strange about loving the train. Throughout 1983 there were intense discussions between the Senate of Berlin, the German Democratic Republic, and the government in Bonn to allow the BVG to run large swaths of the S-Bahn once more. In 1984 West Berliners began to use the aboveground rail service once again and continued to do so up until the spring of 1989 when the new Green and Left coalition in the Berlin Senate decided to expand service even more.

With the fall of the Wall the S-Bahn finally began to function quickly and frequently again and to carry more than one million people a day on close to 2,600 trains across more than three hundred kilometers of track.