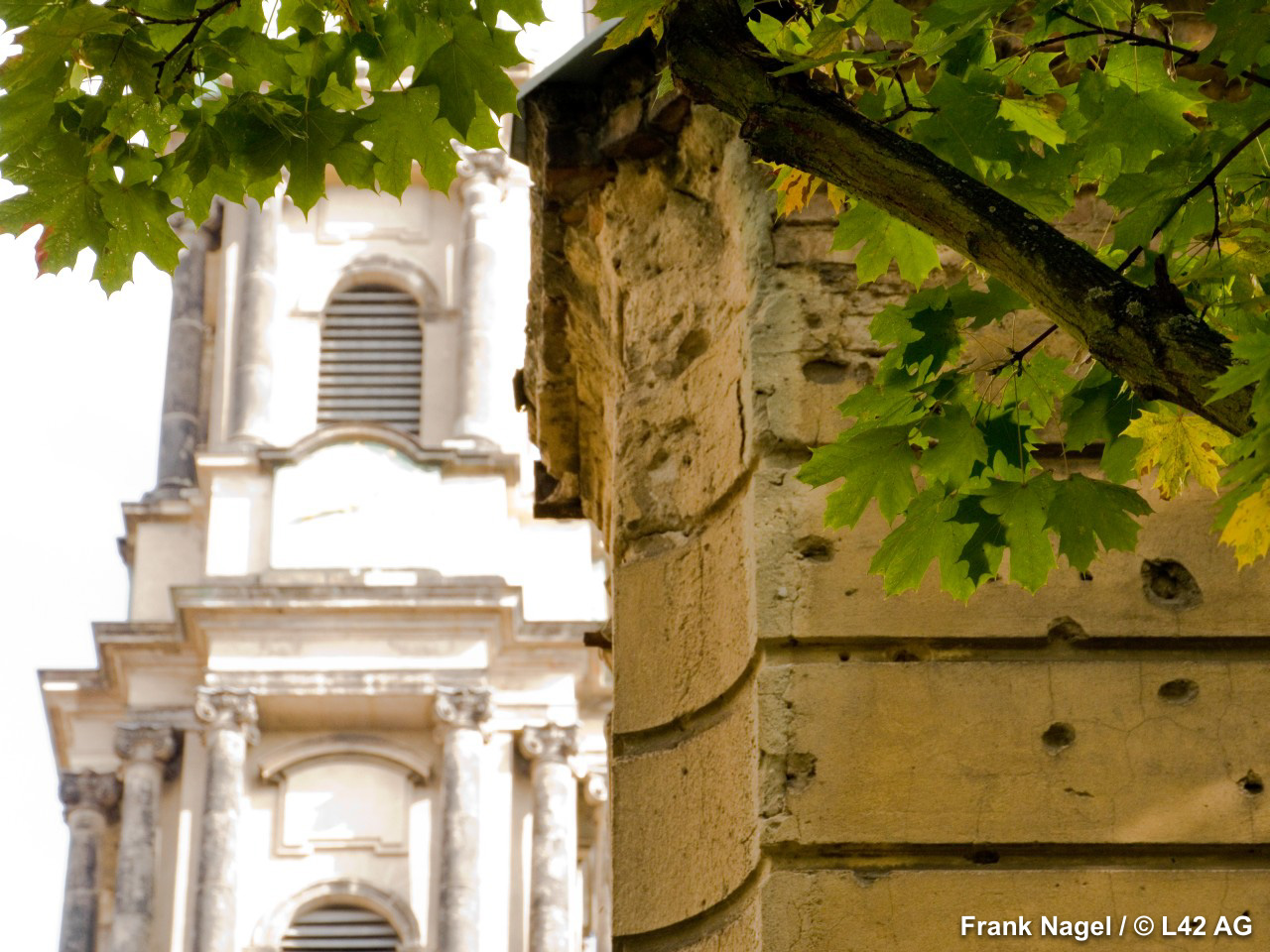 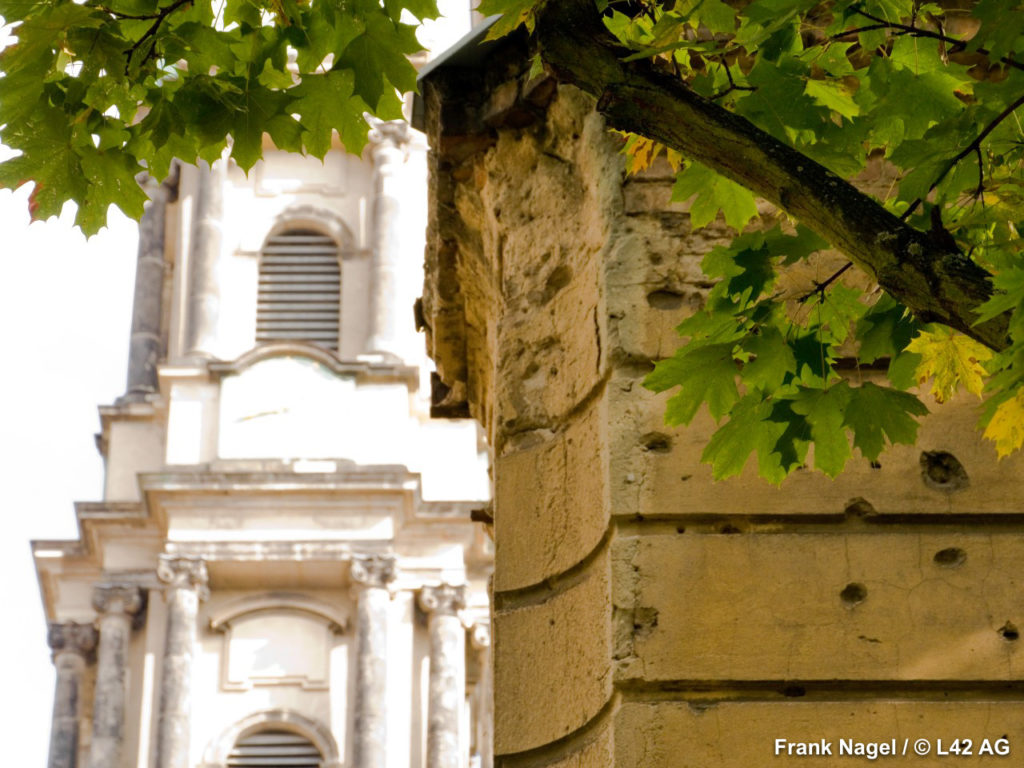 The Sophienkirche is a place of the soul. The poet silently points to the building on the right side of the courtyard whose facade is still covered with bullet holes left over from the last war. It is quite a contrast to its twin on the left, which has been completely restored. This marvelous church with its important steeple stands determinedly in front of us and appears to follow a central plan. However, moving slowly along its edges you begin to make out its long, basilica-like sides.

Memorial stones and urns are strewn here and there throughout the garden behind the church which, were it not for the sound of an electric saw, would be covered by an almost supernatural silence. The surrounding buildings are all of three or four floors, and the garden is slightly off-kilter. A row of ivy-covered tombs remembers some of the dead from 1945, including the former pastor. Behind the parish church there is also the fenced-in garden of the nursery school, its entrance also still pockmarked by bullet holes. And yet, between the headstones and tombs, you begin to notice all the parts of a typical children’s playground spread nonchalantly about: a sandbox, a seesaw, a soccer goal…

The Sophienkirche is an early-18th-century jewel of a church with a long gallery and an elegant pulpit placed upon a refined green, gray, and gold column. Now, it may not be marvelous in the way a rich Roman church might be, no. The Sophienkirche is simply a marvelous church in the sense that it awakens marvel. And it awakens marvel for the context in which it appears is absolutely foreign to contemporary Berlin. It vaguely recalls the pastel colored baroque-like churches of the Portuguese missionaries, with the difference that here the light coming in through the double row of windows is cotton-like and diffused. The soft green of the walls and their borders of silver and gold are like a caress.

The poet is standing before a painting of the church in 1893 that depicts Kaiser Wilhelm II and his important whiskers standing next to his wife Augusta Viktoria of Schleswig-Holstein-Sonderburg-Augustenburg – known to her friends simply as Dona – and the red inaugural velvet celebrating the termination of the initial phases of restoration. Wilhelm II was the third and final Kaiser (emperor) of Germany who held the throne until the end of the First World War as King of Prussia. He was a man of large ambitions, which, unfortunately, were not always accompanied by either common sense or far-sightedness. His beloved Dona was one of the few peaceful elements in a rather difficult life.

Let us, however, leave the poet to contemplate the end of the German empire and instead have a look at the nave. It seems that now would be the perfect time to intervene once again: the plaster is peeling and this fresh smell of the country that greets us is probably the very same thing that’s eating up the church. Confirming the fact that we are indeed within the 18th century, however, along the wall in front of us is a harpsichord.

From the Sophienkirche it is just a few steps to the Jewish High School and from there to the Jewish Cemetery. Between the church and the high school is a two-floor building full of friezes, molding, opulent reliefs of garlands of fruit, putti, and winged muses that stands in quite a contrast to the holes from the war. A large, vaguely nostalgic, toystore called Viel Spiel, literally Lots of Play, occupies the ground floor. The large and bulky front door is topped by a cross and a lamb, the symbols of Christ. The entrance to the Jewish High School is just barely hidden by the old building, what with the security cameras everywhere, alarms, the police stationed out front, and a double-gate with a sign asking one not to lean anything up against the grating.

Few cars pass here along the Große Hamburger Straße, and it could almost pass for any old street out in the country were it not for the red and white tip of the TV Tower sprouting out from behind the tops of the trees in the cemetery.

The Sophienkirche’s bell is a bit hoarse.

We are now entering the oldest Jewish cemetery in Berlin, which was founded in 1672 for the fifty Jewish families that had been welcomed from Vienna. No one knows just how many Jewish Berliners were buried here over the years, but the estimate is more than 10,000. The cemetery was destroyed in 1943 and reopened in 1945 with 2,425 dead in sixteen communal graves, which today are covered by a large growth of ivy. In 1990 the tomb of the important 18th century writer Moses Mendelssohn was restored in honor and memory of all of the fathers of the Jewish community. There is a great quiet here in this central corner of the capital, though it is interrupted now and again by the sounds of hammers connected to the city’s eternal rebirth and from the distant clatter of the tram, as well as by the smells of curry from one of the oriental restaurants just up the block. In the central-most part of the cemetery there is the intense smell of the woods. We are now at the rear end of the school and from where we are standing the Sophienkirche’s bell strangely seems to be growing out of its roof. The security cameras take this all in of course as well.

Posted In: In Berlin with the Poet