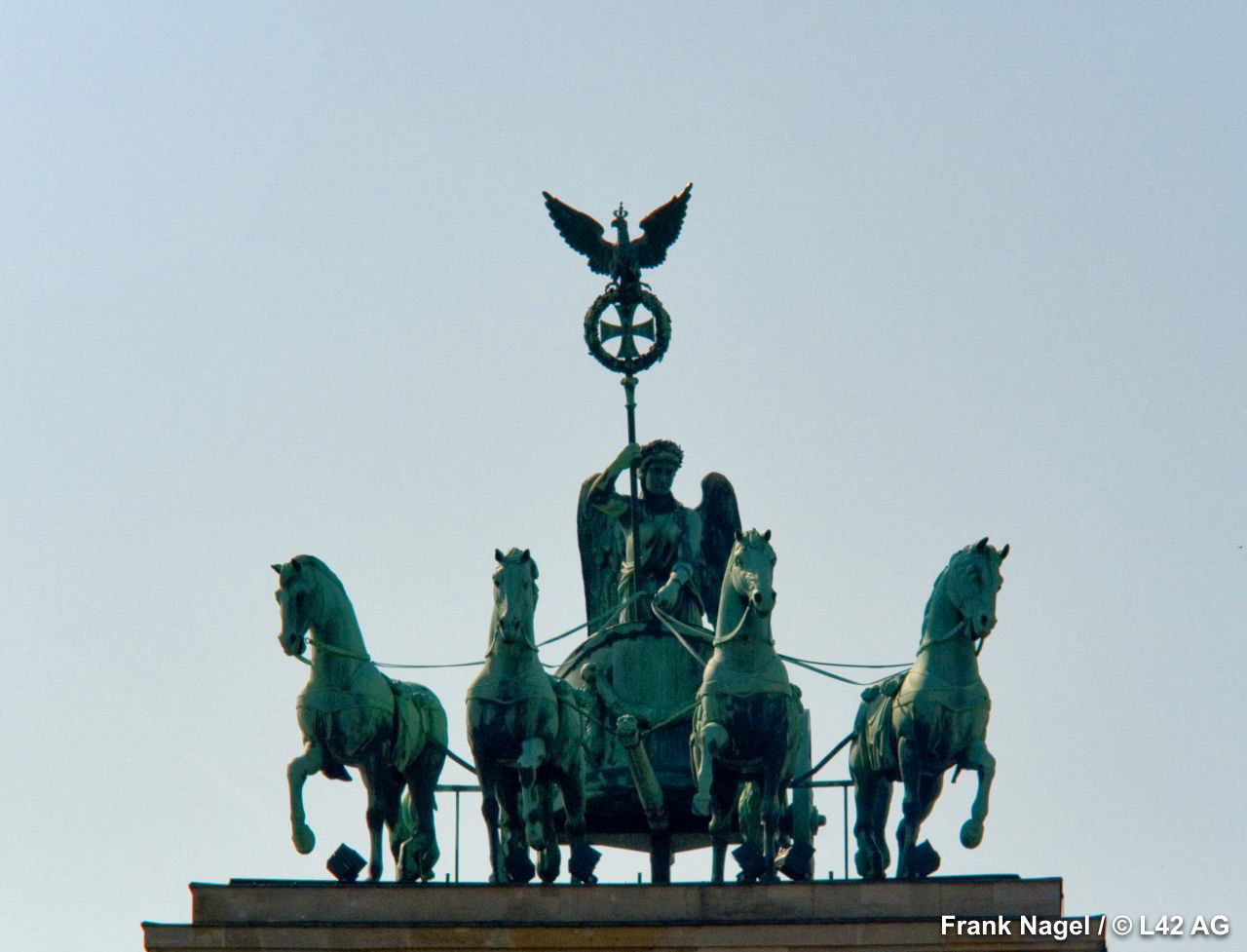 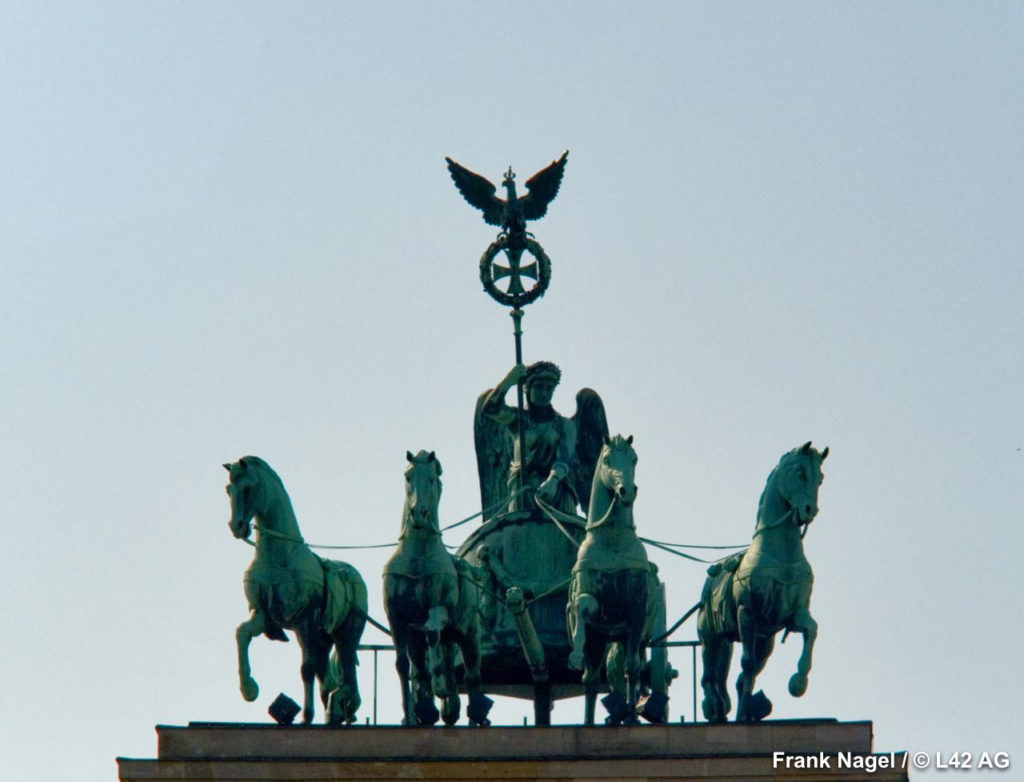 After a lot of wandering about lonely places the poet at long last guides us within the light of the sun, among other people, among our brother and sister tourists. Having been in Berlin without having seen the famous Brandenburg Gate just isn’t possible. And this has got to be known even to poets who wander about the other shores. Even during the First World War soldiers left the trenches during the sporadic ceasefires and had tea with their enemies, exchanged marmalades, cigarettes, and a few words. And tourists, the poet reflects, aren’t really that bad. It has more to do with the monster of mass tourism that has made us too mobile and has made us forget the real reason we are leaving home in the first place. We want to compulsively capture places and images and bit by bit these become simply numbers, objects that are all a bit similar, like those that you can buy at the supermarket.

We’re seated on a bench in the traffic-free Pariser Platz, the city’s open-air salon. There’s the Hotel Adlon, famous theatre of John Le Carré’s spy novels; the Akademie der Kunst; the American embassy on one side and the French on the other; bank and insurance buildings. But what is this Brandenburg Gate exactly that was originally supposed to be called the Gate of Peace? We’ve seen it is millions of public photos, not forgetting all those private ones of friends and family. It is a type of pronaos like in a Greek temple with six gigantic Ionic columns topped by a simple capital, a frieze with reliefs of the Centauromachy and other battles, and a happy Attic tympanum with steps and a central base crowned by Johann Gottfried Schadow’s famous quadriga, or, in other words, those four horses which are elegantly pulling a chariot behind them led by Eirene, the Goddess of Peace, who is entering into the city with the reins in her left hand and a scepter with a Celtic cross in her right. The chariot stands out against the sky and this is precisely why the entire monument is so moving. The bronze of the sculptor has oxidized over the years into a teal which, together with the blue of the sky and the white of the clouds, combines in magically otherworldly. The horses seem to be looking down onto those quadrupeds below who are pulling about coaches of tourists in twos. The real horses are small and robust and wear blinders while the celestial ones are regal and thunderous thoroughbreds whose eyes fear nothing at all.

The poet’s the one who’s begun to talk about horses, not out loud, mind you, but with a series of unequivocal gestures. We ask him if the real horses ever met eyes with those up above. He answers that, yes, they have, but only ever so rarely.

Tourists continue to walk about the square in lumps or bunches and are busy taking photos. They don’t seem to have any time to look at the Gate and that they have to hurry up and take photos of it in order to be able to look at it once back at home and to be able to say to their friends “This is the Brandenburg Gate and that’s me.” The fact that today people most often take photographs by stretching out their arms makes a lot of those who are circling Pariser Platz seem like they are simply doing a series of shoulder exercises.

The poet counts them in a tired way, like how you may count sheep before falling asleep. “One zombie, two zombies, three zombies, four…fifty-seven…Once upon a time tourists would exchange gestures of courtesy,” he says. “They would timidly ask one another if they would be so kind as to take a photograph, they’d take turns explaining the simple functions of their cameras: ‘No, no, it’s quite simple, all you have to do is look through this little hole here, press here, no, don’t worry about the feet, the head is more than enough! Thank you!’ Today, in our digital world, no one asks anyone else anything anymore. Extending their arms forward, holding these little rectangular tablets, which I haven’t yet figured out if they’re books, telephones, notebooks…Zombies, all of them…”

At the height of the Brandenburg Gate there are still two little Ionic temples also crowned with tympanum. The poet takes with a little leap to that on the left and points out the Room of Silence. A sign inscribed with Reiner Kurze’s words says: “Come in, here you may be in silence.” It is a little hall for meditation open to people of all religions and countries and resembles that which for Catholics could be a modern chapel of the Blessed Sacrament. When the square outside is bustling, this little room gives the impression of serene emptiness and aims to represent an invitation to tolerance and brotherhood among human beings in order to extirpate once and for all violence and racism. It invites us to gather up our strength, to reflect upon sad memories, to meditate on hope, and to express gratitude for that which has happened in this city of the last few years. The little room is decorated with a circle of chairs and cushions which look onto a bare white wall upon which is hung a dark tapestry, the work of the Hungarian artist Ritta Hager, with a clear circular design at its center which seems to be the sun, a holy spirit, a god, a chakra, an illumination…On the floor below the tapestry is a rough stone in the form of a pyramid. The walls, the curtains, and the ceiling are white; the floor, the base, the chairs, and the cushions are dark while a series of soft white lights illuminate the curtains and a single light points onto the tapestry. A video camera frames the silence and the silence is so complete that you can hear only the buzzing of your own ears.

When you leave this little room you see Berlin, the world itself, in another way. You not only feel regenerated, but it is as if everything could indeed be seen with different eyes, from a different perspective. That which used to weigh you down has become lighter somehow, like tired limbs after a restorative sleep. For the moment entrance to the Room of Silence remains free – what incredible luck that silence hasn’t yet been economically quantified like time. Another positive is that there aren’t any lines to get in, nor are their any crowds jostling for the chairs and cushions. There is simply silence, true, pure, and fantastically invisible before everyone’s eyes.

We’ve finally understood what the poet meant when he wanted at all costs to finish our tour up here at the Brandenburg Gate. Now that we are full of energy and extremely understanding of our fellow tourists, we can once again go out onto the square and enjoy the world to the fullest.

Finding an empty space on one of the benches out here could seem to be an almost impossible task, but the enlightened ones shine for their good fortune as well, With a feline jump the poet lands on a spot just vacated by a group of young travellers who had all – who knows how – bunched up together on the narrow seat. It’s nice to have an invisible poet friend in these moments because he always manages to arrive a second before the others. We happily sit down.

“Excuse me, may I?” From out of nowhere a Junoesque tourist arrives and points to the poet. We smile at the thought that she wants to pick him up and take him away, but we’re also a bit sad. And yet, the poet is a man of the world, far be it for us to keep him away from it! “Please!” we both respond with a smile. But instead of accompanying the poet onward, the wicked woman sits right down on top of him, and crushes him with all her weight.

Posted In: In Berlin with the Poet