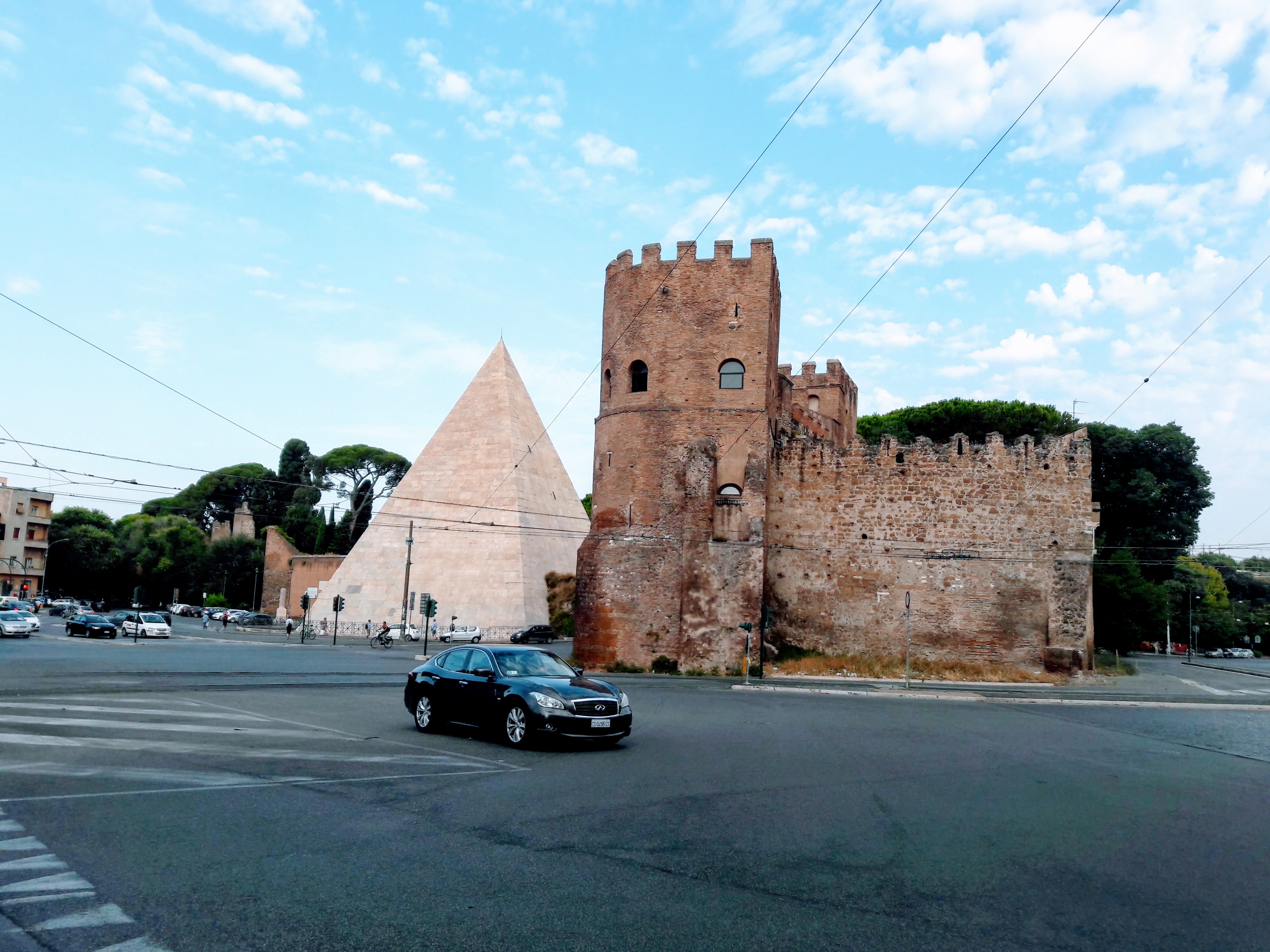 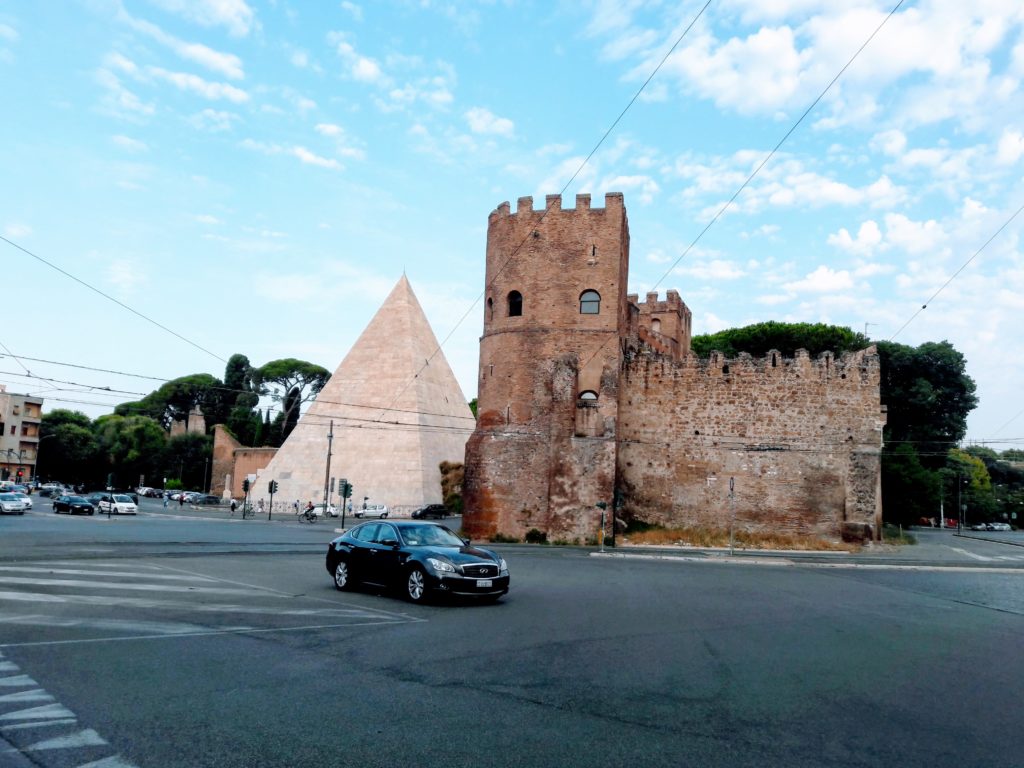 Among the various activities scheduled last summer in Rome, I had the pleasure of queuing up one morning in July in front of the closed doors of the offices of ACEA, the company in Rome supplying power, water, gas and a number of problems that cannot be solved on-line.

Before 8:30, when the offices open to the public, you can just stand in line outside waiting for the customer windows to open, and chat free of charge with lots of people from Rome and Lazio who have got up too early on purpose, and take a glance at the Pyramid of Cestius, symbol of a grandiose, dominant Rome, and the nearby non-Catholic cemetery that hosts the graves of illustrious intellectuals.

This a place, like others, where you can try and understand how and if your problems with ACEA, now modern and efficient, can be solved, and more generally to understand the Italian situation.

That morning I arrived at 8:05 to make sure I was one of the first, not so much to solve Italy’s problems but, I confess, to fight my own small personal battles.

On that hot summer day the same thing had occurred to an elderly pensioner who lived not far from the ACEA offices at the Pyramid of Cestius.

I didn’t know him, but liked him right away. He had a light tailor-made suit, two brilliant blue eyes and the gait of somebody who had just walked a lot while making nothing of it. I told him that he could go without worries and sit down on a low wall nearby, that we would certainly keep his place and that there was no need at all for him to stand there; and he replied thank you, there is no need, and that there are more serious problems than that.

This was a classic opening for a chat by people queuing at public offices or at a stop waiting for a bus that doesn’t arrive, and you start to talk.

At 8 in the morning I could just as well have remained silent, but I liked this man.

I was born in Rome, and of course that was not my first time queuing up. But some years had passed since my last wait with my fellow citizens, so I experienced that morning with the overwhelming nostalgia of an emigrant who had left his country and coming back to find it different, despite a desperate desire that time had not gone by, that nothing had changed and that his memories, with their mythical status due to the passing of time, still reflected reality.

In other words, I took that queue at ACEA in July as an embrace, a kind of warm welcome home.

While the Eternal City undoubtedly has more defects than merits, it is still wonderfully unique because while it makes you wait eternally,  it also allows you to meet other people waiting, and thus makes time not only magically relative but also choral.

In Rome, waiting can even turn into an epiphany, a sudden and complete revelation of a mystery.

One morning in the summer of 2018, for example, the problem of reading the water meter in my mini-flat in the Castelli Romani, suddenly disappeared when the distinguished man next to me told me in solemn tones that Italy was not doing so well and that he wondered how it would turn out.

Heavens! It seemed to me that I had suddenly gone back in time and rediscovered someone with a clear mind and a decisive tone.

I looked at him surprised. Perhaps the old pre-Republicans, the ones without a tooth left and who have rediscovered a childlike innocence, will be the ones who will save Italy?

In front of this vigorous white-haired gentleman I said things I thought I would never say or think publicly, but that came out that morning in a terribly spontaneous and genuine manner.

I said nonchalantly that the Italians are unable to govern themselves politically and that they are fatally condemned to an authoritarian government obliging them to behave suitably.

As I said this I thought it might be better to keep quiet. If such cynical words came to the ears of some imbeciles around here they might even consider it as a justification for a coup d’état.

This type of expression was not typical of me, I should have been ashamed of myself and rushed off to hide under an ACEA drain cover.

Why didn’t I do this?

Probably so as not to lose my place in the queue.

When the elderly rebel learned that I lived in Germany, he took a deep breath and got ready to say something.

At this point I was afraid that everybody in the queue would lynch me, but they all kept to the places they had gained.

The old man held forth calmly but with authority.

He made a long preamble about his past as the only anti-fascist schoolboy in his class, his relative who was a war hero in Russia and then a partisan martyr, and the severity of the German soldiers occupying Rome, and finally made a sort of eulogy of Mussolini.

Now I might have expected anything on that hot summer morning except to hear an anti-fascist praise the Duce with confident, elegant rhetoric.

Throughout my childhood I had heard a lot about seniors who, during long waits for a bus or a train would huff that things were better when they were worse, ironically or sometimes even seriously, alluding to the fascist period, but these were always considered to be inarticulate outbursts by the uneducated masses.

Now that that generation has mostly passed away, or if there are some survivors left they are not at the bus stop but in the best of cases at home with a nurse, why the devil did I decide to start up this unfortunate conversation that morning?

This elderly gentleman was there at the offices of the company supplying power, water and gas, and deserved some attention. He wanted to explain, recount and teach to people without his experience, like a grandfather to his grandchildren, and I listened to him with respect and interest. The people around started to pay attention too, and stopped looking at their watches. A clear-headed, educated elder is undoubtedly a resource for humanity.

I asked him his name and he replied with his name and surname: Giovanni Battista A. and added that he had seen everything in the various Italian republics from the end of the war to the present and that the figure of the Duce should be admired as an example of honesty and industriousness.

You can criticise Benito Mussolini for lots of things – the bald orator said –  except for not being honest or not having worked with great energy for the economic progress of Italy.

Do you know that his devotion to the people – the partisan warmed to his topic – led him to indignantly reject any payment for his political work, and since he did not accept a salary as a politician, after the war, the Italian State refused to pay a widow’s pension to his widow Donna Rachele because her late husband did not have an income as a basis for such a pension?

I looked at him incredulously. And the old anti-fascist continued:

His widow got a pension only after long litigation, on the basis of the Duce’s salary as a journalist and school teacher. Do you understand? I know this for sure because the lawyers who advised Rachele in the lawsuit were close relatives of mine, and also anti-fascists. Do you understand?

I had understood that his man waiting to go into ACEA grasping a pile of bills wanted to compare the morality of the past with the baseness of our own times, and I could not but agree with him on this. When he talked about the great, solid public works of the fascist period, about the land reclamation projects and school reform, I had to agree with him.

Time was running out and at 8:20 the orator left the topic of Mussolini and suddenly went further back in time.

He mentioned Article 50 of the 1848 Albertine Statute, the constitution dating not only before the Republic and before fascism, but even before Italian unification. According to this, members of Parliament would not receive any fees for their political activity, and when a 19th century MP requested payment of his train ticket to go to Turin, it was denied with the famous words that serving one’s country should be considered an honour.

With these words, at 8:30 on a day in July 2018, the doors of ACEA opened up and the agreeable orator did not accept the offer by people waiting to go ahead in the queue, but calmly waited for his turn to come.